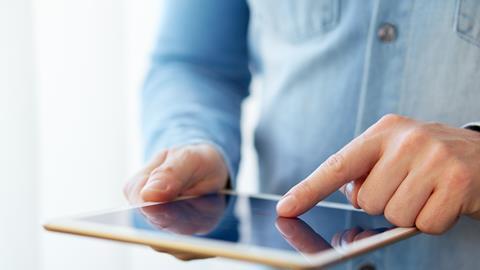 This week, Neil Withers gets hands-on with your smart device.

If you’re listening to this podcast on a smartphone or tablet, or perhaps through a snazzy laptop or desktop computer with a touchscreen, the chances are you’ve very recently used some indium tin oxide. But you probably haven’t seen it. 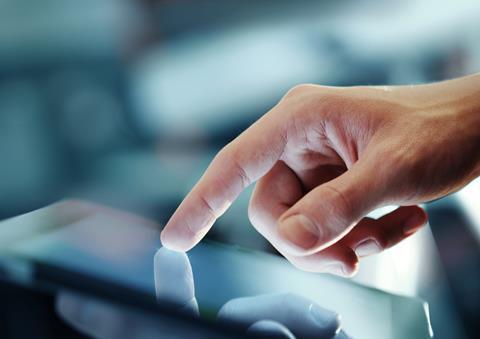 But what exactly is ITO? It’s probably better described as tin-doped indium oxide, which is to say it’s indium oxide, In2O3, with varying amounts of tin added. The amount of tin can be anywhere up to 10% by weight, but once you add too much you end up with In4Sn3O12, which is a different compound with distinct properties.

I’m a structural chemist at heart, so now I’m going to have to describe the structure to you, as it’s the best way for me to get my head around it. Indium oxide has a cubic structure, with some oxygen atoms missing, meaning the indium atoms are in an octahedral coordination environment. But there are two different environments for the metal atoms – one with a slightly squished octahedron of oxygen atoms around it, and another with an even more distorted octahedron. Studies using Mossbauer spectroscopy show that the tin atoms head towards the less distorted site – and who can blame them?

Doping this structure with tin – replacing some 3+ indium ions with 4+ tin ions – means that the delicate balance of electrons in nicely insulating indium oxide is upset and it becomes conducting. There are electrons in its conduction band, as a physicist might say. A physicist might go on to tell you that most conductors are not transparent, because they do not have an energy gap between their valence and conduction bands – something most transparent materials do have. But because ITO is only just conducting it is still able to let visible light through without interfering with it. 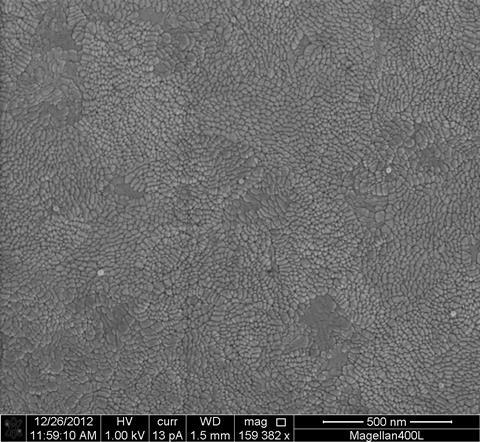 ITO on a glass substrate

So how do touchscreens work? There are two types of touchscreen out there, but only one uses ITO – the other type, the ‘resistive’ screen which you can write on with any old stick, are just sophisticated switches. When you poke the screen, it deforms slightly and touches a conductive layer behind it, allowing a current to flow. The screen knows where that current has been generated and responds accordingly.

Screens with ITO in them are known as capacitive touch screens, and work in a different way: there are conductive wires under the screen, carrying charges. Touching the ITO screen with anything that can carry an electrical charge – like your finger – interrupts the flow of current, and another set of wires running perpendicular to the conductive ones sense the disruption. They send the feedback to the device to let it know where on the screen you’re touching. ITO touchscreens, rather than the deforming type, are able to sense multiple points of contact, which gives rise to the pinching and swiping we are all now so familiar with.

Because capacitive touch screens require a charge-carrying pointer, you won’t be able to use an insulator as a stylus. Just wearing gloves is enough to block the charge from passing into your finger, frustrating your ability to use your phone in cold weather. Luckily, all it takes is a conductor, so you can now get specialised pointers and gloves with conductive thread sewn into the fingertips, so you can still swipe in the snow.

It is this combination of properties – transparent in the right frequency range and with just enough electrical conductivity – that makes ITO perfect for the job. It allows you to see what the tiny LEDs behind the touch screen are showing you, and to tell your device what to do with a fingertip dance of taps, pinches and swipes.

So swipe right and show your appreciation for some solid state chemistry (and physics)!

That was Neil Withers with touchscreen material indium tin oxide, or ITO. Next week, Mike Freemantle returns with a compound that provided one of the distinctive odours of trench warfare in the first world war

The active ingredient in bleaching powder is calcium hypochlorite. This compound dissolves in water to form an alkaline solution containing calcium hydroxide and hypochlorous acid – ‘the most powerful antiseptic known,’ according to the Edinburgh team.

Join Mike next week to find out more. Until then, get in touch with any comments or compound suggestions. Email chemistryworld@rsc.org or tweet @chemistryworld. I’m Ben Valsler, thanks for joining me.