Chemists have used NMR spectroscopy to study three-dimensional structures on an irregular silica surface for the first time – and revealed a surprisingly orderly picture. Lyndon Emsley from EPFL, the Swiss Federal Institute of Technology in Lausanne, hopes to soon progress from this non-air-sensitive model system to study catalysts.

Since 2000 Emsley’s team, involving researchers in France, Switzerland, the UK and Italy, has sought to study ‘dirty’ surfaces like silica supports, using innovative approaches. NMR earns its full name, Nuclear Magnetic Resonance, by aligning spins of atomic nuclei using a large magnet. Once aligned, the nuclear spins are most often flipped by a radio signal. The nuclei then slowly return to their original orientation, emitting tiny resonant radio signals that give clues about the chemical environment around them. However, signals can be hard to make out over background noise, which spectroscopists have tried to overcome with measures including enormous magnets. 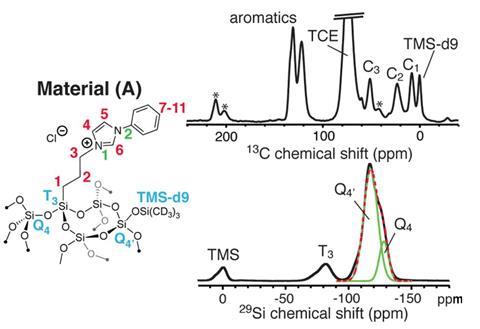 The alternative dynamic nuclear polarisation (DNP) method gets better signal-to-noise ratios by first aligning the spins of unpaired electrons. A blast of microwave energy can then transfer the electron spin alignment to nuclei. DNP has become more common since sufficiently powerful gyrotron microwave sources were integrated with NMR machines in the 1990s. ‘In 2010, we showed how to do this for surfaces,’ Emsley says. ‘That was really the breakthrough for us.’

However, silica doesn’t usually contain unpaired electrons. Consequently the scientists needed to introduce unpaired electrons by adding nitroxide biradical ‘polarising agents’. They freeze a biradical solution to the catalyst surface at 100K. ‘The polarisation is generated by microwave radiation, and then transfers spontaneously through the frozen solvent to the surface layer,’ Emsley explains. His group has now boosted the resonant signal 200-fold, providing sufficient information to understand surface environments.

Emsley’s team modified a silica surface with imidazolium ligands that bind platinum atoms. ‘One of the really exciting things is that both for the ligand fragment and for the metal complex we see a well-defined single structure, adopted by all sites on the surface,’ Emsley says. That’s not what chemists instinctively expect, he emphasises.

Olivier Ouari from the University of Marseille, France, calls the study an ‘outstanding and daring piece of work that opens new bright perspectives and will stimulate other scientists in academia and industry’. The 200-fold signal boost means that an experiment that might once have taken four years can now be done in an hour, he adds.