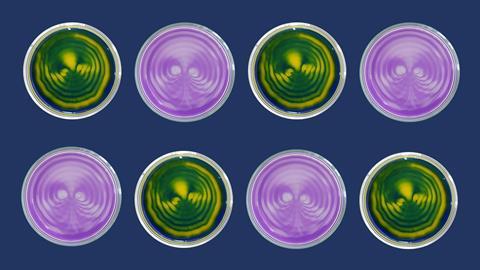 By doing reactions on speakers pumping out bass frequencies, researchers in South Korea have brought molecules that normally react unpredictably under their control. Kimoon Kim from Pohang University of Science and Technology and colleagues explored reactions involving dyes that change colour in air, leading to regular and reproducible patterns. ‘This is the first study to show that it is possible to control and visualise chemical reactions using audible sound,’ claims Kim.

Even though audible sound doesn’t have enough energy to directly affect chemical processes like bond formation or dissociation, the team was intent on using it as a controlling force. They thought of the standing waves that are created in liquids by vibrations. Named after Michael Faraday, these waves have been known for nearly 200 years. 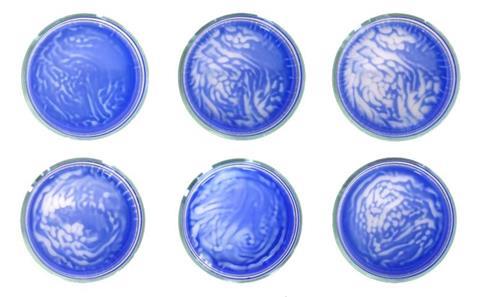 Without soundwaves, the patterns methyl viologen/sodium dithionite solutions generate when exposed to oxygen are chaotic and not reproducible

Until now, scientists have used them to control floating and sediment particles, says Rahul Dev Mukhopadhyay from the Institute for Basic Science (IBS), Pohang. As chemists, Kim, Mukhopadhyay and colleagues instead turned to molecules that changed colour on reaction with gases. They now explored how sound vibrations help gases dissolve at the interface with water containing such molecules.

These systems are usually out of equilibrium, forming colour patterns that repeat unpredictably. For example, a solution of methyl viologen mixed with sodium dithionite alternates between blue and colourless as it reacts with oxygen in air. Exploring a wide range of possible frequencies, the researchers found that only a narrow range of bass sounds from 25−90Hz forms concentric patterns free from fluid flow or random turbulence. Four other systems form similar patterns at these frequencies as they dissolve gases controllably, including a host–guest macromolecular complex. When the patterns are disturbed, they become temporarily chaotic, but then heal to return to their original shape. 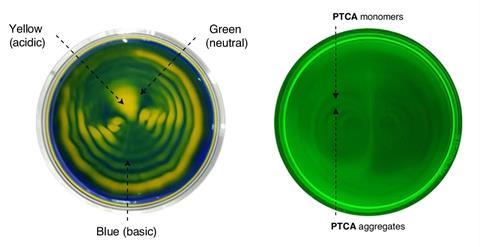 Team leader Ilha Hwang, also from IBS, says the approach can be used to control the synthesis and distribution functional materials. The researchers have shown that a system containing the indicator bromothymol blue reveals ‘the coexistence of acidic, neutral and basic domains in a solution’, Hwang explains. ‘This can be useful in the development of smart pH-responsive chemical network systems within predetermined microenvironments, mimicking those operating inside our cells.’

Maïwenn Kersaudy-Kerhoas, a microfluidics researcher from the University of Edinburgh, UK, comments that sound-induced segregation of particles is well-known, but she hadn’t heard of any attempt to apply it to chemical patterns. The approach could be a useful educational tool, she adds. ‘Sound-generated patterns in liquid are relatively easy to reproduce at home or in the classroom,’ she points out.

Kim hopes to expand the approach to physics, fluid mechanics, chemical engineering and biology. ‘One can say without any doubt, our strategy sounds very interesting,’ he quips.

The article was updated on 19 August. The original article identified Ilha Hwang as team member and stated that the conditions under which perylene tetracarboxylic acid forms aggregates were alkaline.