After 62 years, scientists clinch the identification of molecules that confirm codebreaker’s ideas in a different ‘digital’ area 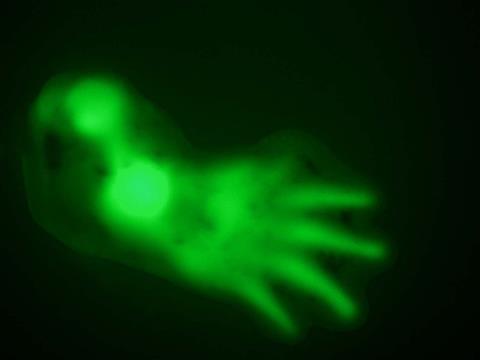 Scientists in Spain have confirmed that a mechanism proposed by computing and artificial intelligence pioneer Alan Turing in 1952, but that had fallen out of favour, explains how fingers form. James Sharpe’s team at the Centre for Genomic Regulation in Barcelona has identified proteins that create a ‘Turing network’ that tells embryo limb cells what to become.1

‘Since the 1970s there’s been a debate between scientists,’ Sharpe tells Chemistry World. ‘We are confirming an idea that Turing posed over six decades ago, and it’s taken this long to find the Turing molecules.’ The discovery could help improve our understanding of how multicellular structures build themselves and potentially benefit regenerative medicine, helping to fix broken tissues.

After his second world war codebreaking work, Turing turned his attention to different kinds of pattern. He showed that movement and reaction of networks of chemicals that activate or inhibit themselves and each other can form ordered stripes and blotches. Turing also suggested that in embryos ‘morphogen’ substances could drive development in a similar way. When Sharpe started his PhD in the 1990s an alternative theory, known as positional development, where smooth long-range chemical gradients were most important, was dominant. However, ongoing debate over whether our fingers could be formed by Turing networks lured him in.

The CRG team started searching for Turing molecules with Sox9, the earliest known gene to be activated in embryo development, which produces proteins telling cells to become bone and cartilage. The scientists studied differences between cells containing the Sox9 gene and others where it’s knocked out as they started to become fingers. ‘We have digital and interdigital cells – we just had to look for any genes that would be switched on in one population and not the other,’ Sharpe explains. Two genes influenced Sox9: Bmp, which encodes for bone morphogenic protein production, and Wnt. Sox9 also influenced the production or activity of BMP and WNT proteins, providing the key ingredients for a Turing network.

Sharpe’s team also built a computer model encompassing everything from molecular to tissue level interactions, making and testing predictions over many cycles. For example, they predicted that turning the Bmp gene off would reduce the number of digits, while supressing the Wnt gene would affect interdigital areas, merging fingers together. This matched the effects of inhibiting WNT and BMP protein signalling in cultured limb tissue. ‘The real strength of the conclusion comes from manipulating the system using drugs, but we wouldn’t know whether that meant anything sensible if we didn’t have the computer model,’ Sharpe says.

Jeremy Green from King’s College London calls the study ‘a really beautiful piece of work’. ‘This is really fundamental stuff: clinching our understanding of chemical morphogenesis in the hand is something we can all appreciate for the sheer wonder and illumination of it,’ he says.