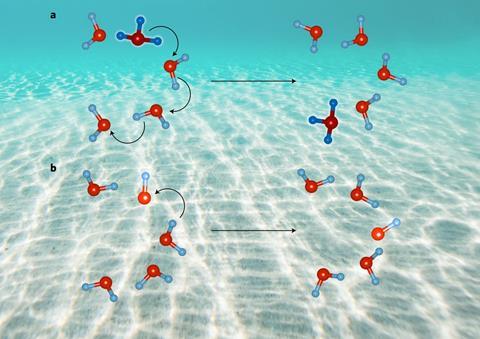 Hydronium ion diffusion benefits from multiple simultaneous proton hops such as the triple jump shown in (a) while hydroxide diffusion occurs mainly through single jumps, slowing its diffusion, as seen in (b)

State-of-the-art simulations have solved a conundrum that scientists have puzzled over for around two centuries – the mystery of why positive hydronium ions diffuse almost twice as fast as their negative hydroxide counterparts in water.

In pure water, hydroxide and hydronium ions are present in equal quantities. Their motion is fundamental to chemical reactions in water, as well as acid–base chemistry. They naturally form because water molecules react with each other in a self-ionisation process caused by proton transfer. Water molecules deprotonate, or lose the nucleus of one of their hydrogen atoms, to become hydroxide (OH-) anions. Meanwhile, the leftover hydrogen nuclei immediately protonate other water molecules to form hydronium (H3O+) cations.

But despite two centuries of intensive investigation into how these ions solvate and diffuse in water, the underlying mechanism of why hydroxide anions transfer fewer protons and thus diffuse slower than the hydronium cations remained a mystery. Now, US researchers Roberto Car at Princeton University and Xifan Wu at Temple University and colleagues have found the answer using molecular dynamics simulations.

‘We set up a state-of-the-art theoretical scheme in which the proton transfer effects of the water ions could be accurately modelled and understood,’ explains Wu. To do this, the researchers used density functional theory (DFT) to model the problem.

However, DFT previously lacked the accuracy to solve the puzzle for two reasons: an error caused by self-interacting electrons and an effect of long-range weak intermolecular forces that DFT overlooked, both of which affected the modelled structure of liquid water. By reducing the self-interacting error and including the weak molecular interactions in their simulation, the researchers confirmed that hydronium prefers to transfer protons in concerted double and triple jumps and thus diffuses faster.

The team discovered that hydroxide anions diffuse slower as a result of a hypercoordinated state of hydroxide, which contains four hydrogen bonds, is favoured over a three bond version. This structure discourages proton transfer and thus significantly reduces the frequency of multiple proton transfer events, instead preferring single proton jumps that slows ion diffusion compared with hydronium.

‘It’s a very nice study using the best simulation techniques that have been applied to this problem so far,’ comments Angelos Michaelides, who uses simulations to investigate catalytic interfaces with a focus on water at University College London, UK. ‘It provides a qualitatively correct explanation of experimental observations on aqueous ion diffusion. However, it’s not the end of the story – improvements can still be made in the techniques used and in the way in which the data is analysed.’