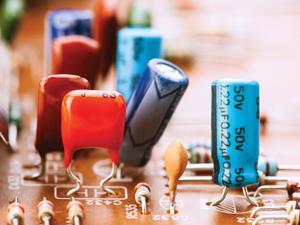 Researchers in the UK have designed a simple and inexpensive circuit that can linearise the charge–discharge behaviour of a capacitor. This could solve one of the most important problems plaguing the development of supercapacitors – the need for a straightforward measurement method for the amount of electrical charge they can store at a given voltage, known as capacitance.

The circuit, reported by the group of Craig Banks at Manchester Metropolitan University, can be added to researchers’ existing cyclic voltammetry, electrochemical impedance spectroscopy and galvanostatic charge–discharge setups. It requires only two precise resistors and a variable capacitor of similar capacitance to the supercapacitor under investigation, components which cost as little as £5.

With potential applications in technologies such as electric vehicles and portable electronics, interest in new supercapacitor materials is growing. ‘But if the way we measure capacitance is flawed, then how is anybody to know accurately how good a capacitor really is?’ asks team member Edward Randviir. The most widely used method of capacitance measurement, galvanostatic charge–discharge measurement, is limited in this regard because capacitance must be determined from the ambiguous slopes of non-linear voltage–time curves. By forcing the capacitor to charge and discharge at a linear rate, Banks’ group’s circuit simplifies such slope analyses.

The group hopes that other researchers will apply their circuit to study a broad variety of materials. ‘Using this technology we could characterise the capacitance of a whole range of electrodes and materials, even newly-researched capacitive materials that are used for capacitors, like sugar cane plants and activated carbon materials,’ says Randviir. Kenneth Ozoemena, an expert in electrochemical energy technologies at the Council for Scientific and Industrial Research in South Africa, agrees that the method could find wide use. ‘I strongly feel that this study will revolutionise the manner in which laboratories across the globe analyse supercapacitors and pseudocapacitors at half-cells.’