Researchers in Brazil have created floating blocks that could be added to stagnant water to suppress the transmission of dengue fever. 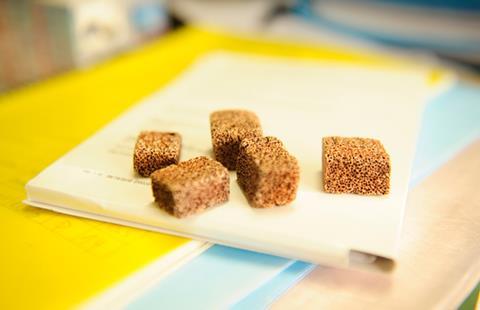 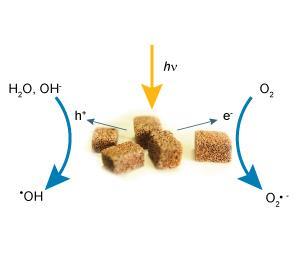 Over 40% of the world’s population is thought to be at risk from dengue, according to World Health Organization estimates. It is spread through the bite of the Aedes aegypti mosquito and symptoms include high fever, joint pain and vomiting.

Sodium hypochlorite, or bleach, can be added to water to eradicate insect larvae. However, as well as being less than ideal from an environmental point-of-view, bleach is easily diluted, especially during the rainy season, and is also photolabile, so it decomposes relatively rapidly when exposed to sunlight and subsequently loses its oxidative ability. This year’s football World Cup in Brazil – and with the 2016 Olympics in sight – has renewed demands for an alternative process to reduce incidences of dengue.

The autoclaved aerated concrete blocks, created by Jadson Belchior and colleagues at the Federal University of Minas Gerais, support a low-cost iron oxide (Fe2O3) catalyst that is activated by the UV component of sunlight. This produces the hydroxyl radical (·OH), which degrades organic matter, including bacteria, fungi and plankton – food sources for Aedes aegypti larvae, and the larvae itself. Because the reactant is transformed into water after the process it can be classed as a green technique. 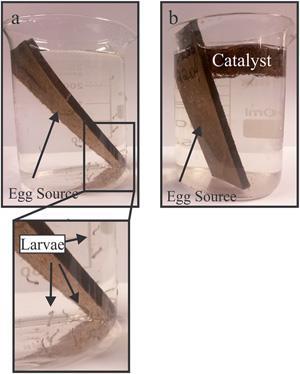 To test the system, beakers containing mosquito larvae and the catalytic blocks were placed under solar irradiation for one week in controlled experimental conditions. Under sunlight only 20% on the larvae survived, and when artificial UV light was used 100% of larvae died.

Belchior explains that the cost of preparing 800 small blocks is less than 30 US cents [19p]. ‘This is enough for a whole residence and they are efficient for more than 2 months.’

Sabyasachi Sarkar from the Indian Institute of Engineering Science and Technology, who has explored water-soluble carbon nanoparticles as a means of controlling the mosquito population, is excited by the new technique. ‘It is well known that hydroxyl radicals are one of the most powerful oxidising agents to destroy any living tissue, and the generation of such a radical by UV radiation using hematite iron oxide catalyst is interesting,’ he says.

This article is free until 13 January 2015. Download it here: