Sunlight transforms plastic into tens of thousands of new compounds 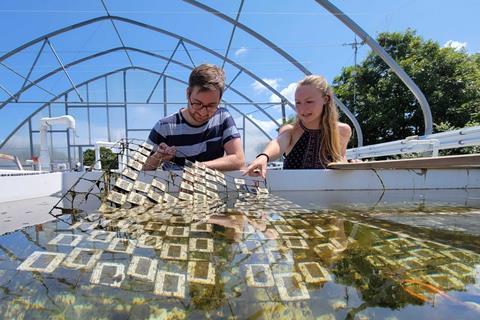 Woods Hole postdoc Taylor Nelson (left) and PhD student Anna Walsh examining plastics exposed to sunlight in an experimental outdoor facility. The two are part of a team that has been examining plastic degradation in conditions that mimic real-life, discovering that the process is much more chemically complex than previously thought

Sunlight can chemically breakdown plastics into tens of thousands of new compounds that in just weeks and many of these dissolve in water, a study led by researchers from the Woods Hole Oceanographic Institution has found.1 The discovery dispels the prevalent theory that sunlight exposure simply physically fragments macroplastics into microplastics in the marine environment, turning them into smaller particles that are chemically similar to the original material and persist in the environment.

The researchers examined the breakdown under sunlight of four different single-use consumer polyethylene plastic bags from three major US retailers – Target, CVS and Walmart – and compared them to pure polyethylene film. After analysing the resultant organic compounds using a mass spectrometer equipped with a 21 tesla magnet, the team discovered that the bags produced between 5000 and 15,000 compounds under sunlight exposure, compared with about 9000 with the pure polyethylene.

‘The growing evidence that photochemical transformation of plastics is an important transformation process in surface waters challenges a widely held assumption about the persistence of plastic in the environment,’ the paper concludes. The authors emphasise the importance of considering not only the fate and impacts of the initial plastics that wind up in the environment, but also the transformation of those materials. They note that the effects of these breakdown products on aquatic ecosystems or biogeochemical processes like carbon cycling are currently unknown.

‘The old paradigm is that plastics don’t break down in the environment – they last forever. What we are finding is that plastics are broken down by sunlight rather readily, and the breakdown products are extremely complex,’ says study co-author Collin Ward, an assistant scientist in Woods Hole marine chemistry and geochemistry department. ‘What is new and significant is just how complex the mixture is – it is at least a factor of 10 more complex than previously understood,’ he tells Chemistry World.

Another important finding from this study is that the composition of the plastic and its additives influences both how fast it breaks down and what it breaks down into when exposed to sunlight. This is important, Ward says, because the overwhelming number of studies focused on the fate and impacts of plastic pollution use plastics that contain no additives, yet it is clear that the behaviour of these ‘pure plastics’ is different to that consumers use.

Previous research by Ward and colleagues, published earlier this year, demonstrated that biofilms growing on plastic in seawater screen light from reaching the plastic surface and may slow plastic degradation by sunlight.2