UK chemists have created superconducting images, including the Chemistry World logo, on paper

The images, created by Paul Kelly and colleagues at Loughborough University, are formed from the superconducting polymer (SN)X. The polymer comprises long chains of alternating sulfur and nitrogen atoms.

Kelly and postgrad student Rob King made the polymer pictures by printing faint, watermark-like images onto paper with an inkjet printer, and then exposing the paper to S2N2 vapour overnight. The following morning, the once ghostly image was clearly picked out by the polymer.

’We’d noticed that fingerprints were sometimes "exposed" by the vapour,’ said Kelly, who was examining vapour deposition of the polymer to make molecular wires. ’This got me wondering what else might act as a nucleation site for the polymer. Would ink spots from an inkjet printer work? When you look at the images under the microscope, you can see that the dots of ink get built upon by grains of the polymer. We’ve shown by Raman spectroscopy that this material definitely is (SN)X’.

(SN)X became famous in the 1970s as the first non-metallic substance found to superconduct. However, this ability to conduct electricity with zero resistance disappears at temperatures any warmer than 0.3 degrees above absolute zero, so isn’t of much practical use. ’(SN)X never quite lived up to it’s promise, and was supplanted by superconducting organic molecules,’ Kelly recalls. ’But maybe there are new tricks in the old dog.’ 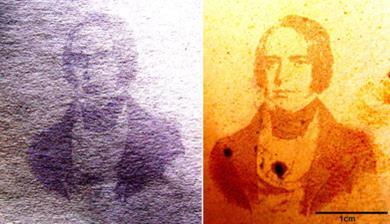 William Gregory, printed in washout (left) then exposed to the monomer vapour (right)

The interesting properties on show aren’t restricted just to the polymer itself.   ’Rob King risked his fingers on this!’ said Kelly, only half joking. S2N2, the four-membered precursor to the polymer, is highly explosive. As is S4N4, discovered by Scottish chemist William Gregory in 1835, from which S2N2 is made.

While Kelly is the first to admit that it’s hard to see exactly how these polymer images could be useful, the team’s other work on (SN)X could provide some interesting results. Along with Roger Mortimer and Sandie Dann, also at Loughborough, Kelly is trying to make single molecular wires of the polymer by incorporating them into highly porous structures called zeolites.

’The pores in the zeolite are so narrow that only single molecular strands of the polymer can form in them,’ said Kelly. ’In (SN)X there are interactions between strands, so the conductivity along single strands could be quite different.’ Kelly plans to publish the zeolite work shortly.