Holograms displayed using interactions between light and the collective oscillations of electrons on the surface of a metal, known as surface plasmons, are set to transform three-dimensional imaging technology. Satoshi Kawata and his team from Japanese research insitute RIKEN’s Saitama campus have constructed images that, unlike credit-card holograms, appear in the same natural colours from any angle.

Plasmons are "quasiparticles" that are observed when electrons in a metal collectively oscillate at light wave frequency. If light falls on a metal with a lower frequency than the surface plasmons it is reflected, while higher-frequency light is transmitted. The frequencies of gold and silver’s surface plasmons are in the visible range, causing their distinctive colours. Katawa’s team exploits this phenomenon. ’Our proposal is plasmons can be used to select colours in a hologram,’ he says. ’This hologram is reconstructed by white light - you don’t need a laser.’ 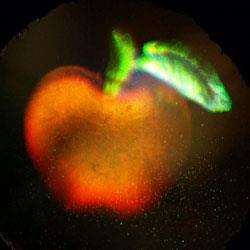 Lasers are still needed to make the hologram. Team members Miyu Ozaki and Jun-Ichi Kato illuminate objects with red, green and blue lasers and the light beams diffract onto a glass sheet covered in a 150 nm thick layer of photoresist material, recording the image.

To make the plasmon hologram, the scientists coated 55 nm silver and 25 nm glass layers onto the photoresist. Shining light into the hologram through a prism from three different angles, one for each colour, reconstructs the three-dimensional image.

Katawa predicts that he and other scientists will eventually use this method to create moving pictures. But even before that such holograms promise ’revolutionary’ tools for personalised medicine, according to Heike Arnolds, who researches plasmon-enhanced photochemistry at the University of Liverpool. ’Chemists are ideally placed to exploit this by producing functionalised hologram surfaces for surface plasmon resonance sensors,’ she says. A glucose sensor might display its readout through characteristic colour changes, Arnolds explains. ’If your apple doesn’t look green, go see a doctor.’