Tramadol, first marketed in 1977, has been in plants all along 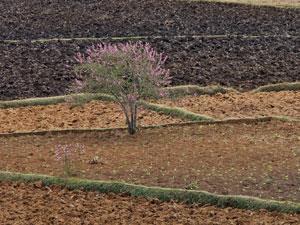 The bark of Nauclea latifolia contains tramadol at medicinal concentrations

In another example of nature beating chemists, the African plant Nauclea latifolia has been found to be a natural source of the synthetic opioid tramadol. First marketed in 1977, tramadol is frequently used to relieve moderate to moderately-severe pain. While other synthetic drugs have later been found in nature, this is the first instance where the discovery involves clinically viable concentrations.

Colloquially known as the ‘African peach’ or ‘pin cushion tree’, N. latifolia is a flowering, sub-Saharan evergreen that grows widely across Central and West Africa and is used by local populations to treat a wide variety of ailments – including epilepsy, malaria, general pain and many infectious diseases.

To uncover the source of the plant’s reported pain killing effect, the researchers fractioned methanolic extracts of the plant by high performance liquid chromatography (HPLC). The resulting fractions were then tested in an assay using live mice, revealing the fraction with the greatest analgesic properties.

‘Our results indicate that high amounts of the analgesic drug, tramadol, can be obtained through a simple extraction procedure from Nauclea latifolia found in Cameroon or sub-Saharan areas,’ says Michel De Waard, a neuroscientist at the Université Joseph Fourier. De Waard adds that the root of the plant could be viably used as a source of tramadol because of the significantly high concentrations of the drug – over 1% of the original dry content.

The team used NMR and HRM spectroscopy, as well as x-ray crystallography, to determine the structure and confirm it as tramadol. Further spectroscopic and isotope ratio analyses confirmed that the compound extracted was indeed natural in origin, and not a by-product of cross-contamination. This unexpected discovery supports the traditional uses of N. latifolia roots in the treatment of pain; however, although other parts of the plant are also used in traditional remedies, the team found no analgesic compounds in the rest of the plant.

While it is probably too early to speculate on the widespread cultivation of N. latifolia to make tramadol, the team have developed a simplified process for extracting the drug and are hopeful this might be of benefit to local communities. De Waard explains that while synthetic tramadol is not a costly drug in most developing countries, it is still expensive for many African citizens.

‘The work described has been performed in a rigorous manner, and the highly experienced investigative team has taken great pains to show that tramadol is actually a natural product produced by its plant of origin, Nauclea latiolia,’ says Douglas Kinghorn, a medicinal chemist from the Ohio State University, who did not take part in this study. ‘This report…shows that the subject of ethnopharmacology still has much to offer biomedical research in terms of drug discovery.’

While the study focussed exclusively on N. latifolia from Cameroon, several other species of Nauclea also grow across Africa and the team are now investigating if they also make tramadol, as well as just how the plant makes the drug.