How could a tree make tramadol? 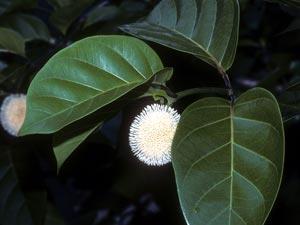 N. latifol grows widely in Cameroon and is used by traditional healers to treat a wide variety of complaints.

Researchers in France, Switzerland and Cameroon are convinced that the African pin-cushion tree produces the well-known painkiller Tramadol and are determined to prove it. Back in 2013, a team led by neuroscientist Michel de Waard, of the Joseph Fourier University, claimed that significant quantities of the drug were present in the root bark extract of Nauclea latifolia, which has long been used by locals in West and Central Africa to treat pain and disease.

Last year another team, led by Michael Spiteller who is based at the Technical University of Dortmund, Germany, ran some tests of their own and cast doubt on these findings. They proposed that the high levels observed in the samples from North Cameroon were likely the result of anthropogenic contamination by livestock that had overconsumed tramadol, as it is commonly added to their food. Seemingly undeterred, de Waard’s colleague Ahcène Boumendjel and his co-workers have now suggested a plausible biosynthetic pathway for the production of tramadol from two common amino acids, L-phenylalanine and L-Lysine.1

A key step in this proposed pathway is the aldol condensation of the derivatives 3'-methoxyacetophenone and N,N-dimethyl-5-aminopentanal. From the resulting adduct it is easy to imagine that a simple dehydration and some redox chemistry could provide a keto-enamine, ideally set up to cyclise to form tramadol. To add weight to this theory, the team synthesised a dicarbonyl precursor of the keto-enamine and were able to achieve a one-pot conversion of the dicarbonyl to tramadol under reductive amination conditions, albeit in just 10% yield. Byproducts of this reaction point to the keto-enamine and its iminium ion tautomer being involved as intermediates.

‘The report not only showcases a biomimetic synthesis of a natural product; more importantly, the synthesis in turn provides strong support for the proposed biosynthetic pathways of tramadol,’ comments Zhiqiang Ma, a research fellow in the department of biochemistry at the University of Texas Souhtwestern Medical Centre, US.

The same team has also recently described a 13C position specific isotope analysis study, which is complementary to this work.2 To extend this research further, Boumendjel says they now plan to ‘continue the investigation of the biosynthesis pathway by using labelled amino acids and in vitro cultures of Nauclea roots [to] provide irrefutable evidence to confirm the natural origin of tramadol.’