Green tea is good for you, but why? Scientists in China are trying to answer one aspect of this huge question by pinpointing which components of green tea help lower cholesterol levels, as well as how they do it. 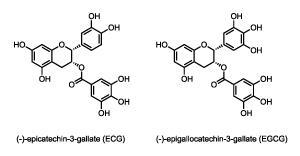 Green tea has been used in traditional Chinese Medicine for centuries and many studies have demonstrated its numerous health benefits, including its positive action against cardiovascular and neurodegenerative diseases. Polyphenolic compounds constitute most of green tea’s chemical content and have been linked to the disruption of cholesterol biosynthesis in vivo. However, there are so many different compounds in green tea that it has been difficult to work out which ones are active and exactly how these affect biological function. 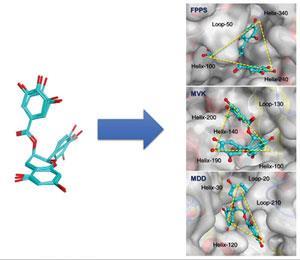 The team then used computational modelling techniques to work out how ECG and EGCG bind to the enzymes to prevent their function. The three enzymes have similar triangular-shaped binding pockets and ECG and EGCG have two side groups, which can form strong electrostatic interactions with the pockets. Flexible linkers separate the side groups allowing ECG and EGCG to adopt the optimum shape for effective enzyme-binding.

‘This work fills an important need to define the binding of components of natural products to key enzymes that may contribute to major pharmacological activities of traditional nutritional medicine,’ comments Basil Roufogalis of the University of Sydney in Australia, who is an expert on active natural products within herbal medicines. Designing molecules that mimic the shapes ECG and EGCG adopt within the enzyme binding sites should lead to more effective drugs for reducing cholesterol levels with fewer side-effects.

The most surprising thing, according to Xu, is how a very small change in the shape of a molecule can have a large effect on its activity and mode of interaction with its biological target. The team are now examining other natural lipid-lowering molecules found in green tea, Chinese herbs and food supplements to work out their mechanisms of action.