Chemists in France have found a new way to tear apart the triple bond of N2 - one of the strongest bonds there is - with a single atom. 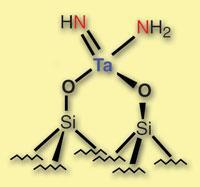 Tanalum atoms can split dinitrogen without any help from their neighbours

The demands of breaking apart N2 usually requires multiple metal centres - whether via the surface of iron atoms used industrially, or the cluster of up to 20 metals in the enzymes that nature deploys for the task. But Jean-Marie Basset, Elsje Alessandra Quadrelli and colleagues at the University of Lyon in France have found that single tantalum atoms isolated on a silica surface are also up to the task. What’s more, they use a mechanism not seen before.

Splitting N2 isn’t just a test-of-strength side-show; it’s an essential process in industry and biology. Life uses ammonia (NH3) as its nitrogen feedstock, which comes virtually exclusively from splitting dinitrogen. Certain bacteria have the enzymes to do this, and ammonia is produced in 108 tonne quantities annually via the Haber-Bosch process, largely for use in fertilizers.

The tantalum hydride system isn’t quite the first to split dinitrogen using a single metal atom - in 2003, Richard Schrock developed a molybdenum complex that could do just that. However, while the tantalum hydride simply requires heating in a 1:1 atmosphere of nitrogen and hydrogen, the Schrock system requires ’judicious alternate application of proton and electron sources - so the mechanism must be different,’ said Quadrelli.

Another key difference is that the tantalum hydride process doesn’t actually release ammonia - the two nitrogen atoms remain separately bound to the metal. This is something the Lyon team plan to look at next. ’We plan to take this two ways,’ Quadrelli told Chemistry World. ’We’ll go more fundamental, to understand the exact stepwise process. We’ll also go more applied, and investigate this as a catalyst to incorporate nitrogen into organic substrates - converting alkanes into amines, say. And of course we’ll look at ammonia production - you never know what might come out of it,’ she said.