Proof that the compound cannot exist after all

An international team of researchers has found that previously reported technetium mono-carbide (TcC) does not exist. Calculations show that scientists had actually been looking at an undiscovered phase of elemental technetium. 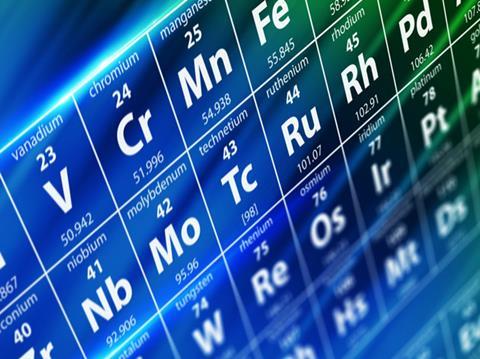 Transition metal carbides have a platinum-like electronic structure along with mechanical and thermal properties that make them promising catalysts and extreme environment materials. Despite its rarity and elusive radioactive nature, scientists have puzzled over the stability of TcC since the 1960s. Driven by contradictory experimental results, Artem Oganov, at the University of New York at Stony Brook, US, and colleagues, decided to use computational chemistry to investigate its existence.

The team calculated the stability of transition metal carbides based on the strength of metal–metal and metal–carbon bonds. They found that, as you move across the periodic table, d-orbitals become more populated, metal–metal bonds become stronger and metal–carbon bonds become weaker. Technetium acts as a breakpoint. Metals on the left of technetium readily form mono-carbides due to the weaker metal–metal bonds, and those on the right form metal rich carbides as those bonds are stronger. With TcC, Oganov says: ‘We showed by direct calculation that technetium mono-carbide does not exist – it just cannot.’

For the first time, theoretical studies using first-principles evolutionary crystal structure prediction cemented these findings and confirmed that TcC is unstable. Through analysis of the cubic cell dimensions and comparison with high temperature experimental results, Oganov says the team made an additional discovery: ‘We found that what experimentalists actually held is a new phase of pure technetium.’

Ivan Oleynik, director of the materials simulation laboratory at the University of South Florida, US, is enthusiastic about the work. ‘By quantifying the weakening of carbon–transition metal chemical bonds with d-shell filling, the researchers proved that the technetium carbide does not exist at high temperatures and the cubic phase of elemental technetium is formed instead, thus solving an important controversy that perplexed the nuclear materials community for a long time.’