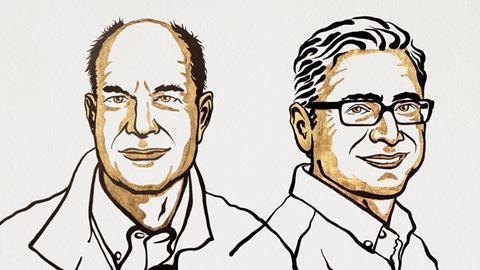 The 2021 Nobel prize in physiology or medicine has been shared by two US-based researchers whose work helps to explain our sense of touch and ability to perceive temperature.

David Julius from the University of California, San Francisco, and Ardem Patapoutian of the Scripps Research institute in La Jolla, California, have been recognised by the Nobel committee for their discoveries of receptors for temperature and touch.

Julius carried out experiments using capsaicin – the compound that gives chilli peppers their heat – to identify a temperature-sensitive ion channel known as TRPV1. The finding, which was reported in 1997, led to the discovery of other receptors that are also involved in sensing temperature. This includes the TRPM8 ion channel, independently shown by both Julius and Patapoutian in experiments involving menthol to respond to cold.

Source: © The Nobel Committee for Physiology or Medicine/Mattias Karlén

In 2010, Patapoutian also identified a cell type that responds to mechanical force as it gave off an electrical signal when prodded with a micropipette. After a laborious search, Patapoutian’s team discovered the two mechanosensitive ion channels, Piezo1 and Piezo2, responsible for the phenomenon. Piezo2 in particular is present in high levels in sensory neurons. In addition to its essential role in our sense of touch, which is sensitive enough to differentiate between surfaces that are identical but for a single atom substitution, Piezo 2 also helps regulate other physiological processes like breathing and bladder control.

The Nobel committee notes that the scientific knowledge at the heart of this year’s prize is being used to develop treatments for a wide range of conditions, including chronic pain.