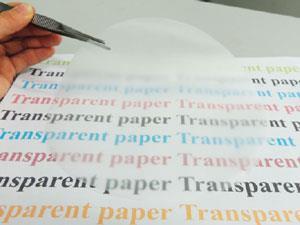 The paper has excellent transparency and scatters light well, ensuring solar cells make the most of every photon

A piece of transparent paper made from wood-based cellulose fibres is an unlikely addition to a solar cell that actually increases its efficiency.1 The work by US and Chinese scientists builds on recent developments in paper-based electronics that could offer a green and sustainable future for electronic devices by replacing plastics.

Now, researchers have designed a transparent paper that has both high optical transparency (96%) and high haze (60%), and demonstrated its effectiveness as a solar cell substrate. 'We can get a substrate with a high optical transmittance and, meanwhile, high optical scattering in the forward direction,’ say Liangbing Hu, a co-author of the research at the University of Maryland. ‘No other transparent substrates have such properties that are ideal for solar cells.’

The paper was made by unzipping primary cellulose fibres. The team did this by processing micro-sized wood fibres using a TEMPO NaBr-NaClO oxidation system to introduce carboxyl groups into the cellulose. This weakens hydrogen bonding between the cellulose fibrils and causes the wood fibres to swell up and collapse. The result is high packing density and excellent optical properties. 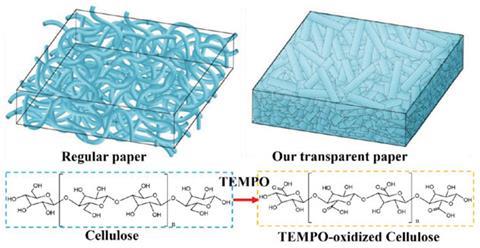 The micro-fibre paper is dense but still transparent, giving it excellent optical properties

Similar transparent papers have recently been made by other groups using similarmethods but they were based on cellulose nano-fibres,2,3 which require more energy and time to produce. Since the new paper is based on micro-fibres, Hu says their method requires much less energy intensive processes and could therefore enable low cost paper devices with much better performance.

The team laminated the paper onto an organic solar cell to test it, and saw the power conversion efficiency increase from 5.34% to 5.88%. 'Our transparent paper can increase the energy efficiency of any type of solar cell where light trapping is helpful,' says Hu. 'This will enable low-cost solar cells based on wood nano structures.'

'This is the best example I've seen of integrating a simple scattering medium as a photon concentrator,' comments Anthony Harriman, who designs artificial photsynthetic systems at Newcastle University, UK. 'The diffusive nature of the paper is most impressive and could lead to important advances in designing simple optical circuits without elaborate tracking devices.'