A remote-controlled chemical laboratory that can be operated through the internet was unveiled on 8 December at Cambridge University, UK. Part of the unique educational ’Weblabs’ project, already trialled at the universities of Cambridge, Birmingham and Imperial College, UK, and the Massachusetts Institute of Technology (MIT), US, the system allows chemical engineering students anywhere in the world to operate a real-life laboratory without costly equipment, as Markus Kraft of Cambridge’s chemical engineering department explained.

At the formal launch, one click of a ceremonial mouse was enough to set in motion a chemical reaction between phenolphthalein and sodium hydroxide in a small perspex reactor. Industrial flow meters, spectrometers and other monitoring devices carried all the details of the reaction online to a remote computer, where a webcam view of the reactor showed reagents mixing and slowly turning pink. 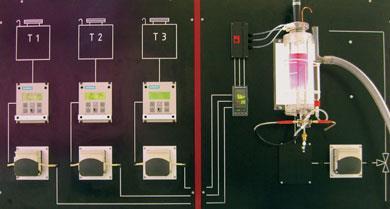 In the pink: teaching reactor can be run from anywhere in the world

Although the reactor has to be set up and maintained by on-site technicians, reactions like these can potentially be run 24 hours a day by students in other countries, with no equipment needed other than internet access and readily-available software.

Mike Goodson, a teaching fellow at the department, explained that students have already used the system to discover how real reactors behave quite differently from idealised computer simulations: fluids don’t mix equally all the way through, for example.

Weblabs is also a useful training tool for industry, added David Good, of the Cambridge-MIT Institute, which sponsors the project. The laboratory gives chemical engineering students a taste of industrial remote-controlled processes, he said.

The Weblabs concept, Kraft explained, was set up some six years ago to encourage partnership between academics, industrialists, and teachers. In 1999, a collaboration between MIT and Microsoft established ’iCampus’, with a budget of $25 million, from which flourished concepts like Weblabs and its simplified precursor, iLabs. Bringing the world’s largest electronics company, Siemens, on board has now allowed the Cambridge University group to set up something akin to a miniature industrial plant.

Despite the clear potential of a web-based laboratory, scientists at the Cambridge launch said that it could not replace hands-on experience. But as well as being a useful teaching aid, the online system might in future be used for outreach to schools and the public, suggested Lynn Gladden, head of Cambridge’s chemical engineering department.