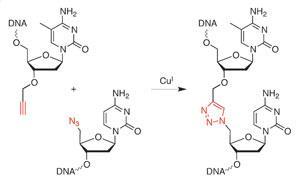 Human cells can still read strands of DNA correctly if they are stitched together using linkers not found in nature, a new study shows.1 The artificially linked DNA was created by joining oligonucleotides using click chemistry. This synthesis technique is highly efficient and boasts a number of advantages over the usual enzymatic approaches to assembling DNA strands. The breakthrough could pave the way for a purely chemical method for one-pot gene synthesis.

Today, genes are made in the lab using a combination of DNA synthesis, PCR amplification and enzymatic ligation. However, the enzymes used in the process impose limits, including being unable to incorporate any epigenetic information into the final gene.

‘As chemists we always sought to synthesise long strands of DNA but have been limited by our assumption that the phosphodiester bond is necessary for DNA to function in cells,’ says author Ali Tavassoli of the University of Southampton, UK. The DNA backbone is made up of pentose sugars and phosphate groups that stitch the nucleotides together using phosphodiester bonds. This backbone acts as the scaffold for the four bases that make up the genetic code.

The click DNA approach relies on a rapid and efficient stitching together of modified DNA strands using the copper-catalysed alkyne–azide cycloaddition reaction.  Click-linking DNA leaves behind a triazole group in the backbone and it was feared that cellular machinery would be unable to read these unnaturally joined DNA strands. The new study demonstrates error-free transcription in human cells, the first example of a non-natural DNA linker working correctly in eukaryotic cells.

‘This is important because it shows that we don’t have to stick to the phosphodiester backbone of the DNA at the site of DNA ligation,’ Tavassoli explains. ‘This suggests that we can replace the enzymatic methods for DNA assembly and DNA ligation with highly efficient chemical reactions.’

‘This is a mind blowing advance that demonstrates chemistry’s power to manipulate nature’s nature,’ comments chemist Barry Sharpless at the Scripps Research Institute, US. ‘I only dreamed I’d get to see click chemistry do this in my lifetime. It is a marvellous achievement.’ He also notes that there is ‘not much difference in speed either between the natural and unnatural here. It just goes flying through the machine here like a whirling dervish.’

‘This provides an alternative route to gene synthesis through a really innovative technology,’ says biochemist Geoff Baldwin at Imperial College London, and it could be used to link together DNA molecules to create sequences that would be difficult to generate using traditional gene synthesis. ‘What they demonstrated in this paper is that the gene is functional with a single click linkage. What is not clear is what would happen if you had 10 of these base-click linkages within that gene and whether it would still be functional,’ he adds.

Previously, Tavassoli and Tom Brown at the University of Oxford, UK, and colleagues showed that click-linked DNA was correctly read by Escherichia coli bacteria. 2 ‘The next big step that we need to take is for us to show that you can assemble multiple oligonucleotides in one pot by this method. That means 20, 30, 40 self-templating oligonucleotides thrown together in a pot and assembled by click-chemistry,’ says Tavassoli.