Eight-letter genetic code hints at how alien life might evolve

Researchers have created an ‘alien’ genetic code made out of eight bases instead of the usual four. The expanded genetic alphabet shows how life could arise if organisms never evolved proteins but instead relied on RNA as their biomolecular workhorse.

Life on Earth is built around proteins: they catalyse biochemical reactions and provide cellular structural elements. DNA, on the other hand, acts as biological information storage unit, while RNA provides a link between the two.

But an expanded genetic code created by Steven Benner from Firebird Biomolecular Sciences, US, and his team of xenobiologists shows that this template for life might not be the only feasible one. Their eight-letter DNA has additional functionality and translates into RNA that behaves more like a protein, making life without them a possibility.

‘Expanded genetic systems allow us to challenge the notion that the most conserved aspects of biology, shared across all life, are special,’ says genetic systems engineer Chang Liu from the University of California, Irvine, US, who was not involved in the new work.

The artificial DNA has many of the characteristics that support evolution in natural DNA. Not only does it store information, it can also be translated into RNA using a mutated polymerase enzyme. This is because Benner’s base pairs integrate seamlessly with natural ones. They can be placed anywhere within a DNA strand without disrupting the double helix structure – a key aspect for evolution, which requires base pairs to be interchangeable. 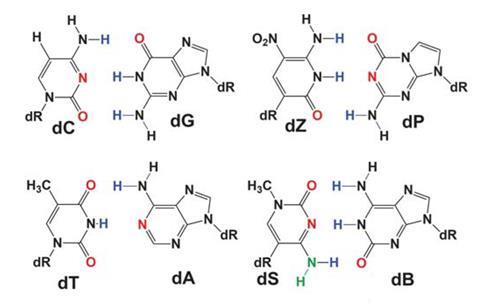 Many unnatural base pairs scientists have created over the last two decades stick together due to hydrophobic interactions. But without hydrogen bonds to hold the pairs in an edge-on arrangement, they can slip on top of each other and collapse the double helix. Benner and colleagues decided to mimic nature and use hydrogen bonded base pairs, although they altered the pattern of bond donors and acceptors.

‘I was impressed,’ says Liu. ‘The beauty of natural DNA is that sequence does not, for the most part, influence structure. This makes DNA a good information system because it is equal opportunity for storing any sequence.’

Benner’s team sneaked some functionality, like a nitro group, into their alien DNA – an otherwise chemically unexciting molecule. ‘We added these groups for the purpose of adding functional power to the translated RNA molecules,’ says Benner.

Proteins, says Benner, might not be the only possible building block for life. ‘It’s quite conceivable that in an alien life form, Vulcan shall we say, the efforts proceeded like they did on Earth to improve the RNA. But the lifeform did not invent proteins, but continued to improve RNA to make a bigger alphabet with functional groups. So Vulcan life could very well not have proteins at all.’

But eight-letter DNA might also have some applications closer to home. With eight letters instead of four, a five-base sequence has more than 32,000 possible variations instead of just 1024. This could be a boon for biomolecular data storage.

Benner’s team is also working on diagnostic and therapeutic applications. ‘We’ve evolved pieces of [eight letter] DNA to bind to breast cancer cells, bind to liver cancer cells and to anthrax toxins, and some of them may even have catalytic activity,’ he says.

Liu hopes that Benner and his co-workers will continue to integrate the artificial DNA with biology as others have done with their artificial genetic codes. ‘This study’s base pairs are much more sequence general and therefore more versatile from an information coding standpoint; they have huge potential,’ he says. ‘The key next step is to engineer enzymes capable of replicating and mutating this synthetic DNA.’

Benner says he purposefully didn’t build alien DNA to be self-sufficient. ‘Because if I do that it creates a biohazard, and I have to spend my time explaining why it won’t escape the lab and take over the world.’