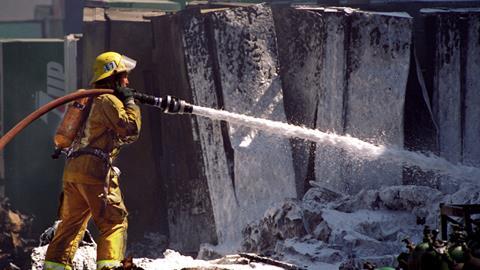 The US Department of Defense (DOD) has released new data showing that the number of military sites with groundwater potentially contaminated by per- and polyfluoroalkyl substances (PFASs) is actually more than 60% higher than the previous figure released by the Pentagon. The DOD’s updated inventory of its facilities that are undergoing assessment of PFAS use or potential release has increased from 401 in July 2018 to 651, as of the end of the 2019 financial year. ‘It just means that we know that there is a possibility that PFAS substances were at these military sites in the form of firefighting foam, and so we need to look into whether it was used there,’ DOD spokesperson Chuck Prichard tells Chemistry World. The agency is not actually testing the groundwater at these military sites yet, but first checking for evidence that PFAS-containing firefighting foam was ever used in these locations. ‘We are currently in the assessment phase,’ Prichard explains.

The DOD report, released on 13 March, points out that the agency’s initial focus back in 2018 was on installations with potentially significant historic use of aqueous film-fighting foams (AFFF), but the updated figures represent a more comprehensive estimate of installations where PFAS may have been used or released. Meanwhile, the Environmental Working Group says it found evidence within DOD documents that PFAS has been detected in groundwater at 14 military installations at levels above 1 million parts per trillion (ppt), which far exceeds the 70ppt drinking water lifetime health advisory level recommended by the US Environmental Protection Agency (EPA).

No fluorine-free firefighting foams, including those with no PFAS compounds, currently meet the military’s safety standards, according to DOD. The agency anticipates that removing firefighting foams with PFAS chemicals from current systems will likely require almost every component of Aircraft Rescue and Firefighting (ARFF) vehicles to be replaced, and it estimates the retrofit would cost nearly $200,000 (£168,000) per vehicle. With approximately 3000 ARFF vehicles currently in use in the US military, the estimated cost is between $4 billion and $6 billion over 18 years. DOD is currently researching methods to fully remove PFAS-containing foams from current systems without having to replace ARFF vehicles.

The issue has gained attention on Capitol Hill. The chairman of the House Armed Services Committee, Adam Smith, said on 13 March that the DOD’s new report makes it clear the full impact of PFAS contamination on US communities remains to be determined. ‘The identification of over 250 new sites where PFAS was potentially released is astonishing,’ the congressman stated. He emphasised that it is ‘critical’ for the department to provide communities with timely assessment of these sites, communicate transparently to affected households, and quickly act to protect civilians and service members alike from these chemicals, some of which have been linked to health problems such as liver damage, birth defects and various cancers.