Although neutral in the middle, pure water's outer skin is as acidic as beer

Pure, neutral water has an acid skin. This striking notion has now been confirmed by calculations and tests by an international team of scientists. Victoria Buch of the Hebrew University of Jerusalem in Israel and her coworkers have found that the pH of pure water falls from the perfectly neutral value of 7 within the liquid to just 4.8 or less - about as acidic as beer - where water meets air at the surface.

The finding could be significant for a number of disciplines. In the atmosphere, many important chemical reactions between trace gases take place at the surface of water droplets in clouds. ’pH is an essential factor for many of these reactions,’ said  Pavel Jungwirth, one of Buch’s collaborators at the Academy of Sciences of the Czech Republic in Prague. ’The low pH could also affect the rates of carbon dioxide absorption at the ocean surface,’ added water specialist Richard Saykally of the University of California at Berkeley, US.

And in molecular biology the effect might be reproduced where water comes into contact with water-repelling (hydrophobic) parts of proteins, changing the acid-base chemistry that goes on at protein surfaces. ’The effects of interface acidification on protein and membrane structure could be huge,’ said  theoretical chemist Gregory Voth at the University of Utah. 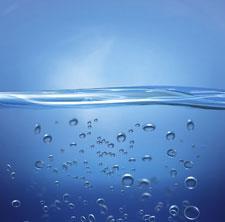 Water has an acid sting at its surface

It has become clear in the past several years that water’s surface may look very different from the bulk liquid. Saykally and Jungwirth have shown that dissolved ions can become either depleted or concentrated at the surface. But the accumulation of protonated water molecules (H3O+ or hydronium, the basic component of acidity in water) at the air-water interface happens for unique reasons.

In 2004 Voth and his coworkers used quantum-mechanical computer simulations to show that hydronium prefers to sit at the water surface rather than deep inside the liquid. Whereas H2O molecules typically form four hydrogen bonds to their neighbours, H3O+ can only form three. The three hydrogens can bind to other water molecules, but the oxygen atom, where most of the positive charge resides, can’t any longer act as a good ’acceptor’ for hydrogen bonds.

So, Voth’s team said, hydronium acts somewhat like an amphiphile - a molecule with a water-soluble part and a hydrophobic part, like a soap molecule. The ions gather at the air-water interface with the hydrogen atoms pointing downwards to make hydrogen bonds and the oxygen pointing up out of the liquid. And in 2005 Saykally and his colleague Poul Petersen used a spectroscopic technique to get indirect evidence for this surface excess of acidic hydronium ions.

Buch and colleagues now have fresh evidence. They have found that ’heavy’ water (D2O) can swap its deuterium atoms for the hydrogen in H2O about 20 times faster at the surface of ice nanocrystals (which have a liquid-like surface) than deeper inside. This switch depends on the presence of hydronium ions.

The researchers also have new simulation data for the surface acidification, which enables them to estimate the pH increase. But Voth cautions against placing too much weight on this number, because of the models’ simplifications. For example, ’they have no possibility of having hydronium and hydroxide [OH-] recombine,’ he said.

A key question now is whether the experimental evidence could be made more direct. ’We are thinking hard about how to do this,’ says Saykally, ’but it’s not easy.’