Birthday parties are rarely erudite affairs. But chemist Fraser Stoddart celebrated his 65th birthday in scholarly style last week, with a group of chemistry’s rising stars that raised a glass - and a slide or two - in his honour.

Dubbed ’The Young(-ish!) Giants of Chemistry’, the conference convened at the University of Edinburgh, UK, where Stoddart received his BSc in 1964 and his PhD in 1966. Stoddart, who left the UK in 1997 for the University of California, Los Angeles, US, is credited with opening up whole new fields in chemistry. He developed ’mechanical bonds’ in which molecules physically interlock; like the links in a chain, for example. These supramolecular processes depend on understanding molecular recognition and self-assembly, techniques that underpin much of nanotechnology.

The name of the conference sprang from the idea that those presenting at the meeting should be leaders in the field, but at least a generation below 65. Stoddart’s long support of young chemists was acknowledged in tributes throughout the meeting.

The smallest birthday present was presented by Chad Mirkin of Northwestern University, Evanston, Illinois, US, who had created a portrait of Stoddart just 20 micrometres across. The image was produced by  dip-pen nanolithography, a technique developed in the Mirkin group, in which an atomic force microscopy (AFM) tip writes onto a surface in molecular ’ink’. The technique is now used routinely in labs around the world for making and 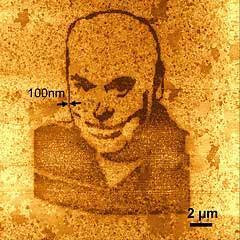 Fraser Stoddart’s smallest birthday present: a microportrait of the man himself

studying materials on the scale of just a few tens of nanometres, Mirkin told Chemistry World.

As well as miniature portraiture, Mirkin told the conference about his recent research on ’antisense nanoparticles’ - tiny clumps of gold that carry strands of RNA on their surface. These strands are complementary to the messenger RNA produced when certain faulty genes are expressed in cancer cells. This means that the nanoparticles can intercept the cancer cells’ mRNA before it reaches its destination, and the effect is far more pronounced than simply using the corresponding free stands of RNA.

The particles are also taken up into cells very quickly. ’We have the opposite problem to most people,’ said Mirkin, ’our problem is very high uptake.’

"Identifying this protein could be very exciting" - Chad Mirkin

The particles are ushered into the cells with the help of a particular protein that acts as a molecular passport - the cell recognizes the protein and immediately takes up the nanoparticle it is bound to. Crucially, this protein was not added by Mirkin - it appears to be generated by the cell culture itself. ’Identifying this protein could be very exciting,’ said Mirkin. ’You might be able to use it to get cells to take up just about anything.’

Harry Anderson from the University Oxford, UK, who also spoke at the meeting, is looking towards medical applications, but in this case by combining supramolecular chemistry with lasers. Anderson has developed a porphyrin dimer that can simultaneously absorb two photons of light from a pulsed laser. Inside a cell, this process causes the porphyrin dimer to generate singlet oxygen, highly reactive stuff that chews up nearby biomolecules and kills the cell. Because the laser light can be focused on areas as small as one cubic micrometre, cells can be targeted very accurately. This process, known as photodynamic therapy, could be used to treat an eye disease called wet age-related macular degeneration (AMD), where patients lose vision as a consequence of abnormal blood vessel growth in the eye.

Using mouse models, Anderson, in collaboration with Brian Wilson at the University of Toronto, Canada,  showed that individual blood capillaries can be sealed off by firing the laser down a confocal microscope - a technique that could be quite readily adapted to treat AMD, he said.

Stoddart closed the meeting over birthday cake and Champagne, by reflecting on what he’d learnt from every single presentation over the course of the four day meeting. But the party isn’t quite over yet - Stoddart will receive his knighthood this week, and many of the Young(ish) Giants will reconvene for two dedicated sessions as the Fall American Chemical Society meeting in Boston later this year.