A brief history of grime

Investigating the dusty depths of the London Underground 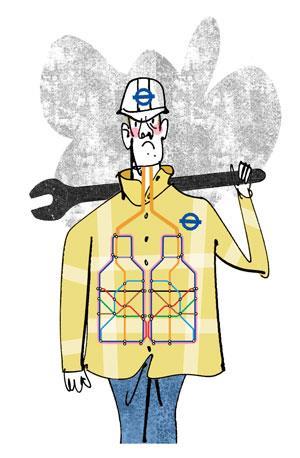 ‘Please mind the gap between the train and the platform.’

It’s a line that haunts many commuters’ nightmares. Looking around the early morning tube, seeing the deadpan stares of workers crammed tightly together, faces pressed beneath the armpits of strangers, it soon becomes clear how a single, repeating line can serve as an ominous reminder of daily rush hour torture. As one of the most claustrophobic environments in modern Britain, the tube network has a strangely thick atmosphere, high temperatures and a stale, metallic odour. Breathing in this concoction, important questions arise. What exactly is carried in the air, and does it make travelling on the London Underground a health hazard?

The tube is, without a doubt, a very dirty place. Run your hand along the underside of an escalator rail and it’ll come away blackened by layers of grime. In 2004, the Institute of Occupational Medicine (IOM) published an independent report on tube dust. Air samples were taken from the tunnels and platforms of three stations (Holland Park, Hampstead and Oxford Circus). Around 90% of the dust was found to be iron, with 1–2% quartz and trace amounts of chromium, manganese and copper. To try and shed some light on where this cocktail of contaminants comes from, further measurements were taken of individual particle sizes. This showed that tube dust is coarser than outdoor London pollution. Combined with the observations of dust composition, it is likely that the main source of pollution is the interactive forces between the brakes, wheels and rails during operation. Other sources may include particles shed by people and their clothing, volatilisation of the oil used for lubrication and residues from tunnelling and repair activities.

As part of their regular safety checks, Transport for London (TFL) monitors the amount of dust in stations and trains. The Health and Safety Executive, the body responsible for enforcing health and safety in the UK, provide a dust exposure limit of 4mg/m3. Data from both TFL and the IOM report show that exposure levels are well below this recommended threshold, with London Underground workers exposed to a maximum dust concentration of about 0.2mg/m3 during an eight-hour shift. Other jobs, such as welding and mining, expose workers to much higher concentrations of iron. The health implications of inhaling dust containing iron depend on whether the metal is oxidised, which oxide is present, and the other species inhaled alongside it. It has been shown that welders, for instance, have double the risk of developing pneumonia compared with the general population, though the exact reason for this is not fully understood. Cell studies on tunnel dust have shown that, at very high concentrations, it could cause inflammation in the lungs. However, at the concentrations present on the underground, there is no evidence that there is any health risk to commuters or workers, assuming travellers are healthy adults of working age. The effect on children, vulnerable adults and the elderly has not been explored, but it is likely that these groups are also at low risk.

So as it turns out, the majority of soot found in the bowels of the capital isn’t an overly complicated or fancy new-age compound, but an element used by humanity for over 4000 years. As the second most abundant metal on the planet, iron can be found all around us and its presence inside our bodies forms an essential part of healthy function. Most importantly, the evidence suggests that inhaling a tiny amount while travelling on the tube shouldn’t be any cause for concern.