French researchers have incorporated molecularly imprinted polymers (MIPs) – dubbed ‘plastic antibodies’ – into a cosmetic product to capture precursor chemicals in human sweat that cause bad smells. It’s the first time that MIPs have been added to a cosmetic formulation and could lead to better deodorants. 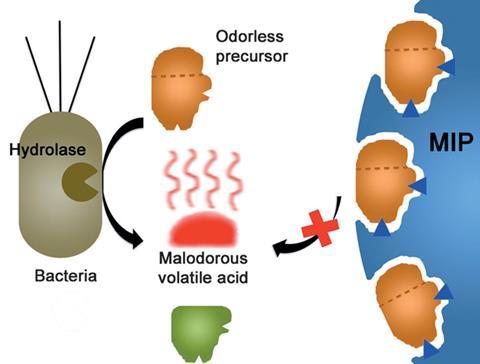 The polymer scavenges the odourless sweat compounds, preventing bacteria from converting them into smelly volatile acids

The culprits behind body odours are certain skin bacteria. These transform some of the secreted, odourless chemicals of sweat into molecules that smell. Deodorants usually work by killing these bacteria with bactericides, including triclosan and chlorhexidine. Anti-perspirants block the flow of sweat with aluminium salts, which also have antibacterial properties.

However, these chemicals can irritate sensitive skin as well as upset the natural ecosystem of skin bacteria, or skin biota, which helps defend against pathogens. What’s more, overuse of these active ingredients may exacerbate the growing issue of antibacterial resistance.

Now, Karsten Haupt and Bernadette Tse Sum Bui and colleagues at the Compiègne University of Technology have teamed up with researchers at French cosmetics company L’Oréal to use MIPs to fight body odour. The team is building on a patent obtained in 2014 and used MIPs in a formulation to selectively scavenge and inactivate the precursors of bad smells, which could potentially do so without disturbing the skin microbiota.

‘What is new is the rational design of the binding site of the MIP to maximise specific binding in the very complex aqueous medium [containing a mixture of sweat and deodorant formulation] in which the MIP needs to function,’ says Haupt. ‘This is the first application of MIPs as the active principle in a cosmetic product.’

To create the MIP the researchers searched for a functional analogue of the glutamine precursors of two whiffy molecules and settled on Na-hexanoyl glutamic acid. They then polymerised the monomer 4-acrylamidophenyl(amino)methaniminium acetate with this compound to make a powdered MIP with binding cavities complementary in shape, size and functional group orientation to the molecule. 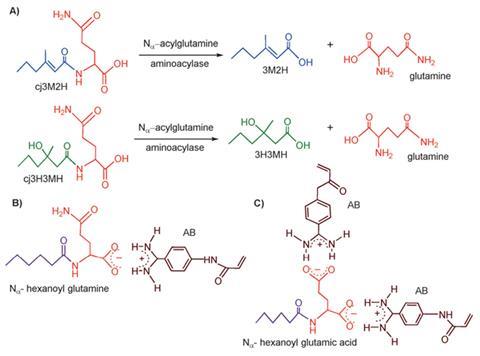 The molecularly imprinted polymers form a complex (bottom) with the precursor of malodorous 3M2H and 3H3MH, which are produced by bacterial hydrolysis (top)

Experiments revealed that when the MIP was added to a mixture of human sweat and deodorant formulation the MIP selectively captured the malodourous compound precursors. ‘What is remarkable is the selectivity of the MIP towards the target molecules, despite the presence of a multitude of other molecules in human sweat,’ says Haupt. ‘By trapping the precursors of malodours in the MIP, these are inaccessible for hydrolysis by enzymes in the skin bacteria and thus odorous molecules will not be formed.’

‘This represents an exciting and significant new direction for the commercial application of MIPs, taking MIPs out of their analytical niche and into everyday life,’ comments Andrew Hall, who investigates MIPs at Medway School of Pharmacy in the UK. ‘While inclusion of such MIPs in a cosmetic product will require much formulation development, it is clear to see the potential of imprinting technology in a range of topical applications, both cosmetic and therapeutic.’