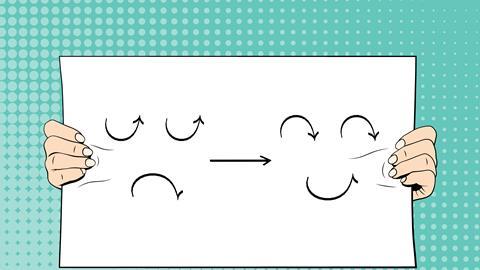 A century of curly arrows

To chemists of a certain generation, Peter Sykes’ classic A Guidebook to Mechanism in Organic Chemistry (first published in 1961, but still going strong in the 1980s at least) conjures up one enduring image: curly arrows. Page after page shows organic molecules reconfiguring themselves via this schematic relocation of electrons, giving the impression of chemical reactions as electronic gymnastics displays. As the student quickly learns, a curly arrow with just one barb at its head depicts the movement of a single electron, while twin barbs denote the relocation of an electron pair.

It’s the habit of the student to receive all instruction as eternal knowledge. But the curly arrow, which enjoys its centenary this year, deftly represents a rather momentous shift in thinking about how chemical change occurs. Once it became clear in the 19th century that organic molecules may have complex but specific molecular shapes, chemists sought to account for why their reactions did not seem to produce random permutations of the constituent atoms. Add bromine to butadiene, say, and the product dibromobutene has bromines either at the 1,2 or 1,4 positions of the C4 chain, in particular proportions. How come?

In 1922, the English chemist Robert Robinson and his collaborator William Kermack, a Scot, offered an explanation.1  They suggested that the way electrons can hop between adjacent atoms will dictate which bonds might form and which might not, and illustrated the notion with curly arrows. Only gradually, however, did the need become apparent to distinguish carefully between the movement of single and pairs of electrons, leading to the arrowhead convention.

Robinson’s 1947 Nobel prize was for his studies of natural products of plants, especially the synthesis of alkaloids. It was important stuff, for sure – but in some ways his insights into mechanism seem more fundamental, helping to make a connection between the messy profusion of organic chemistry and the quantum understanding of bond formation and the disposition of electron orbitals. There is an ingenuousness that is characteristic of chemistry in the way the complexities of the latter phenomenon get boiled down into the iconic simplicity of the curly arrow – as if saying look, this is really all you need to worry about.

To that extent, Robinson’s curly arrow (I should mention that a similar notion was also introduced in 1922 by his friend Arthur Lapworth) follows in a long chemical tradition. The very notion of a reaction mechanism is an acknowledgement that there is more to be said than is granted by the chemist’s arrow denoting a transformation of reactants to products. The common practice, still sometimes followed today, of representing that process with an equals sign seems to have originated with Antoine Lavoisier. It wasn’t until 1884 that Jacobus Van ’t Hoff replaced it with the double arrow to reflect the reversibility of some chemical processes; the single arrow came only afterwards. In this way the ‘reaction arrow’ can be allowed to do more work than just as a signifier of change: it intimates the notion of equilibrium and microscopic reversibility, while forward and back arrows of differing length can suggest which side of the equation the equilibrium tends to favour. As inorganic chemist Santiago Alvarez says in his survey of the arrow in chemistry, ‘The adoption of the arrow in chemical equations to replace the equals sign does not represent just a choice of an alternative symbol, but constitutes a significant conceptual step forward.’2

There’s a subtle but vital distinction in the use of a single but double-headed arrow to depict Linus Pauling’s notion of resonance structures, as in benzene for instance. Here again the arrow evades difficult questions so that the chemist can get on with business: is there literally a fast alternation between alternative bonding patterns, or are we meant to think of them as somehow coexisting and superposed? Either way, we need to preserve a distinction with tautomerism, in which double (and singly barbed) arrows link two different isomeric forms of the same molecule, such as the keto-enol forms of some ketones. That’s generally regarded as a regular chemical equilibrium.

This, as Alvarez shows, by no means exhausts the range of chemists’ arrows. The vertical arrows that denote (if upwards) the evolution of a gas and (downwards) the formation of a precipitate can be traced back to the mid-19th century. Up and down together signify the use of reflux conditions. The humble reaction arrow from reagents to products can be adapted with a cross at the midpoint to show reactions that do not (perhaps contrary to hope or expectation) occur, or with a loop to denote a rearrangement. A double-shafted arrow is often used to show steps in retrosynthetic pathways. All serve as reminders that chemistry is a dynamic science, so that its visual lexicon is always striving to depict its most salient feature: change.