Philip Ball unpacks the instructions for a new periodic table

The pedagogical status of the periodic table in chemistry excites passionate, even furious debate. For some the table is an object of beauty, and the organisation it imposes on the profusion of elements induces something like an epiphany. Attempts to perfect the table’s representation acquire an almost religious fervour. For others (I’m one) it’s just a convenient tool, with an irreducible degree of arbitrariness on which quantum rules impose unsightly bulges and compromises that we just have to live with. 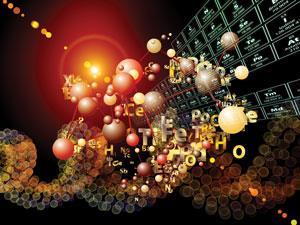 Efforts to rationalise other aspects of chemistry into periodic table analogues therefore come with a degree of baggage. So to a paper subtitled ‘Forging a new “table of elements”’ by Chad Mirkin and his coworkers at Northwestern University in Evanston, Illinois, US.1

Mirkin has pioneered the use of DNA to guide nanoparticles into self-assembled clusters and arrays. In 1996 he showed that the base sequence of single-stranded DNA attached to gold nanoparticles can encode an assembly instruction for joining nanoparticles in specified ways via pairing with other nanoparticles bearing complementary strands, creating a versatile and selective glue for nanotechnology.2 Since then, Mirkin and colleagues have made imaginative use of DNA-guided nano-assembly for biomedical technologies, such as a simple colourimetric sequence-recognition technique where the clustering of nanoparticles brings about changes in light scattering. This work has, among other things, been recognised by Chemistry World selecting Mirkin as ‘Entrepreneur of the year’ for 2013.

Mirkin and his colleagues perceive the pairing of strands as somewhat analogous to the covalent pairing of electrons and call their DNA-tagged nanoparticles programmable atom equivalents (PAEs). These PAEs may bind to one another according to particular combinatorial rules and Mirkin proposes a kind of periodic table of PAEs that systematises their possible interactions and permutations.

Well, it’s not hard to start enumerating ways in which PAEs are unlike atoms. Most fundamentally, perhaps, the bonding propensity of a PAE need bear no real relation to the ‘atom’ (the nanoparticle) with which it is associated: a given nanoparticle might be paired with any other, and there’s nothing periodic about those tendencies.

Not only is the ‘nuclear core’ divorced from the selectivity of the bond, it also has no influence on the bond’s strength. Mirkin’s group have shown that making the DNA tags very short – just four bases or so long – allows for labile decoupling and annealing, so that a mixture of PAEs can find its way to the thermodynamically optimised superlattice in which defects are removed and the total bond strength is maximised.3 You might regard these weak interactions as akin to hydrogen bonds, or the dispersion forces that enable colloidal crystallisation.

Yet there are rules that govern PAE assembly: not all options are permitted, particularly for crystalline and superlattice structures. For example, the particles’ equivalent of ionic radius, namely the hydrodynamic radius of the DNA conjugate, dictates the packing: self-complementary PAEs form a face-centred cubic lattice, while complementary binary mixtures of equal ‘size’ form body-centred cubic or caesium chloride lattices. The researchers draw an analogy here with Pauling’s (approximate) rules for ionic solids – one might also compare them to the Hume–Rothery rules for alloys – with the significant difference that the ‘atomic’ parameters are not givens but amenable to design.

Moreover, on the basis that particles will pack to maximise interfacial contact area (and thus the number of DNA connections), non-spherical, faceted particles can exhibit an analogue of valency: cubic PAEs, for instance, will form square-packed monolayers.4 Such preferential packing enables the ‘purification’ of mixtures of particle shapes by crystallisation, analogous to the same process in organic chemistry.

So is the ‘periodic table’ trope useful here? The relevant ‘atomic’ parameters include DNA sequence, nanoparticle size, shape and composition, so any such table would be both high-dimensional and at least quasi-continuous, and it’s hard to imagine how it could be visualised. An analogy with the ‘chemical space’ of molecules seems rather more apt.5 But such semantic issues risk diverting us from the pertinent point: that any systematic scheme for organising knowledge not only arranges our thoughts but also highlights lacunae: regions yet unexplored.

Unlike the unions of elements, the assembly of PAEs is ultimately algorithmic. A visualisation of their universe could motivate searches for local rules of interaction that might facilitate such things as the formation of quasicrystals and functional gradients, hierarchical cascades of ordering, defect engineering or fine-tuning the balance of thermodynamic and kinetic control of structure. It could provide a map of what’s possible.