The 2013 Chemistry World science communication competition reached its climax at the beginning of March. In its second edition, it attracted almost 100 entries from every corner of the world. The quality of the entries was outstanding and we are delighted that so many chose to take part and share their interpretations of openness in science. 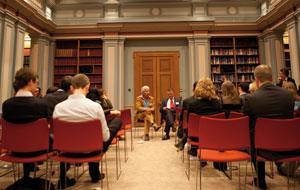 The entrants were shortlisted to 10, who had the opportunity to pitch their stories to a large audience – including members of the press, representatives of industry and a selection of academics at an event organised by one of our sponsors (AkzoNobel) in Burlington House in London, UK.

The judges, a very illustrious panel that included none other than Adam Hart-Davis, Quentin Cooper, Lesley Yellowlees, Philip Ball, Samantha Tang, David Jakubovic (chair) and me then had the difficult task of selecting the winning entry and two runners up. After much deliberation the decision was as follows: in first place was Tessa Fiorini, with ‘Connecting the dots: the birth of modern chemistry through openness’ and runners up were Elizabeth Tasker with ‘Tunnelling through barriers to explain the impossible’ and Debbie White with ‘A day in the office’. Debbie added an element of mystery to the competition this year as she requested to remain anonymous and writes under a pseudonym. When you read her story you will understand why. And you’ll have the opportunity very soon, as the three entries will be published in the May issue of the magazine.

The winner also received a certificate from Robert Parker, chief executive of the Royal Society of Chemistry, and a cheque for £500. In addition, Tessa will be travelling to Sweden to visit AkzoNobel’s headquarters, and then Newcastle to visit Procter & Gamble (our second sponsor). On her return, we will work with Tessa to write a summary of her experience, which we will also publish.

The event was a day-long affair that continued with a panel discussion, followed by the ceremony for the 2014 AkzoNobel UK science award. The theme of the panel discussion was ‘Future proofing the UK’s chemistry-using industries’ with Clive Cookson, science editor of the Financial Times, moderating and Ian Shott (representing the Technology Strategy Board and the Chemistry Growth Partnership), Carol Boyer-Spooner (chief executive of the Chemistry Innovation Knowledge Transfer Network), Andrew Burgess (chief scientist at AkzoNobel), Tony Ryan (pro-vice chancellor at the University of Sheffield) and David Jakubovic (open innovation director at Procter & Gamble) taking part.

This panel of experts advocated closer working relationships between industry and academia as a way of accelerating innovation and unlocking sustainable technologies. The experts saw this combination of entrepreneurial spirit and academic capability as playing to the UK’s strengths and thus as a means of securing growth and future proofing chemical companies and the users of chemicals.

To conclude it all, John Goodby from University of York, UK, received the AkzoNobel UK science award in recognition of his work on liquid crystals. Keep an eye on the Jobs section for a forthcoming profile of his career and achievements.