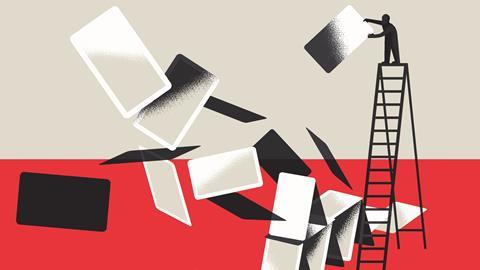 When the first rumours of a then-distant virus started, I was a postdoc at the University of Warwick in the UK. I was trying to get as much science done as possible in preparation for my move to Spain to start my Marie Curie fellowship on 1 March 2020, and I had handed in my notice. As the pandemic landed its first blow to Europe, lockdown was imposed both in the UK and in Spain, and all flights everywhere were cancelled. The start of my fellowship was postponed, and I suddenly found myself with no old job, no new job, no income and no idea what was to come.

There were other storms brewing in my personal life also, and my mental health took a serious hit. I sought medical help for my mental health for the first time in my life, and it saved me. As did the financial help I received from the Royal Society of Chemistry’s Chemists’ Community Fund, a true lifeline. Without this support, I would likely have been forced to abandon my scientific career, and certainly forced to abandon my academic career.

As this was happening to me, I could also see dark clouds descending on my friends and colleagues: losing jobs and other opportunities, fearing the end of fellowships or short-term contracts, their experiments halted, their mental health in tatters. This was not an isolated trend from my close network: an article published in Nature last year highlights the disastrous landscape of interrupted postdoctoral research and postdocs’ exacerbated anxiety in the face of an uncertainty that adds to an already precarious career stage.1 The pandemic is also having a disproportionate effect on women’s publication track records (particularly those with younger children),2 further deepening the gender gap in Stem.

The precariousness of postdoc-ing cannot be fully explained by the pandemic, however. Regardless of the pandemic, postdocs are extremely worried about their future careers, with a survey of 7600 respondents revealing 17% felt ‘extremely negative’ about their job prospects, and a further 39% felt ‘somewhat negative’.3 How much talent is seeping through the holes of a flawed, unsupportive system?

People who have the power to make transformative decisions to support early career researchers (ECRs), defined here primarily as postdocs but not excluding early-career faculty, seem to be under the impression that they face an incredibly complicated task. Well, they do not. Leaders simply need to step up to the job, take clear stances on issues that matter, and then committedly walk the talk. Is that so much to ask for?

The first step towards supporting ECRs is as simple as listening to them. The role of postdocs within institutions is often unclear, leaving them in a no-person’s land of paradoxical misunderstandings. Despite being (technically) staff, ECRs are often referred to as postdoctoral students. The ‘are-they-staff-or-student’ limbo usually means that postdocs face difficulties in accessing university services and support (such as training, external accreditation or counselling) because it is not clear whether they should be directed to student- or staff-dedicated offices. In addition, postdocs are not automatically considered to have a place in faculty meetings, where the direction of a department is debated and decided. Hence, postdocs have little or no representation at the tables where decisions about their work and careers are made, and the lack of diversity at these tables deepens the problem.

In the many conversations I’ve had with my ECR colleagues, some points repeatedly come up as major issues that need addressing.

Acknowledge the impact of Covid-19

A full year of disrupted research will lead to disrupted publishing track records for many, particularly for those with caring responsibilities or health issues. We cannot move forward with business as usual, which was less than ideal to begin with. The bare minimum requirement is for institutions to draft official guidance for future rounds of interviews, reviews and other competitive procedures that clearly states that a lack of conventional productivity in the years of 2020 and 2021 (at least) should not penalise the candidate or applicant.

Postdocs don’t continuously work 14-hour days because they are ‘driven’; they feel pressured to work long hours because the competition is brutal. In an ocean of hard-working, smart people, ‘standing out’ often means working yourself to the bone in the hope of producing a ridiculous amount of science. Academia makes it a point to brag about how creative and intellectually free it is, but then it grinds researchers down into episodes of burnout, where no creativity can possibly exist. Science cannot flourish at the hands of exhausted researchers, but academics are at higher risk of developing mental illness than the general population due to the pressure they are under.4 The stigma surrounding mental health in academia must be overcome, and institutions must find ways to ensure ECRs (and PhD students) are taking the time off they need and are entitled to. Individually, it is also time for us to stop wearing overwork as a badge of honour and start prioritising rest. It is my experience that if one person openly shifts their attitude away from overworking, a whole office then follows almost effortlessly.

Stop asking ECRs to move and allocate funding to keep them

Moving to a different institution or country can be an enriching experience. But moving all the time has incredibly high costs, financially and otherwise. Not everyone has access to savings, and not everyone is prepared to be uprooted. Some people may have medical care arrangements that would be complex to arrange elsewhere. Others may be dependent on a local support network, or may wish to have children and settle down. And others may simply want to grow roots where they are because they like the location – they have the right to make that choice and that should not have to be at the expense of a career in academia. Academia’s obsession with researcher mobility puts serious pressure on researchers’ personal lives and it is ultimately exclusionary.

Institutions must create academic jobs for ECRs and take their salaries into account in their budgets, while funding bodies must reimagine their funding pathways. Postdoctoral grants should cover longer periods of time and could require host institutions to hire postdocs once the grant expires, for example. This longevity would benefit postdocs immensely, not only because it would protect them from precarious working conditions, but also because it would encourage institutions to invest in their training. Institutions would also benefit from retaining expertise instead of having to repeatedly let go of highly experienced researchers, and postdocs would have more time to focus on research instead of worrying and applying for the next grant.

Formally recognise and document the contributions of postdocs to institutional management

The career progression of postdocs is highly dependent on demonstrating certain skills that they have developed but cannot evidence, because the work they do is not formally documented. Postdocs do much of the hands-on, everyday training and supervision of PhD and masters students,5 as well as contributing significantly to the general management of research groups. This experience needs to be acknowledged and documented (in the form of more transparent postdoc job requirements or an exit recommendation letter from the institution, for example) so that it can be formally added to a CV and thus enhance a postdoc’s chances of landing a permanent academic position.

Published research is not a sun around which all other forms of work and impact revolve like less important satellites. Equality, diversity and inclusion (EDI) work, teaching, outreach, public engagement and activism, to name a few examples, are all crucial dimensions of academia. These are the type of activities that make universities stand out and that demonstrate their value to students and the wider community. The people who carry out such activities are, therefore, providing a huge service to their institutions.

Importantly, these contributions all require time, energy and expertise. This should be recognised, meaning that these contributions need to be included in workload frameworks as well as being explicitly included in promotion criteria, leading to salary raises and bonuses. Institutional-level awards and other forms of recognition are nice, but they do not appropriately compensate people for their work. These measures will ultimately benefit not only ECRs but also the wider faculty community and their institutions.

Academia will only ever be as good as the questions academics ask of the world. What are we looking for? What problems are we trying to solve? What solutions are we seeking? Who is our work serving? Different people will look differently at a nail stuck to a door: some will want to remove it, some will want to hammer it further in, and others will hang their coat on it. If the people exploring the world all have the same perspectives of it, the solutions will take longer to find, be less effective and serve a smaller number of people. EDI is critical for us to stand a chance of tackling the complex challenges facing the world today. More importantly, it is our moral duty to ensure that everyone has a true, meaningful opportunity to flourish in academia. And, until they do, we must not dare suggest academia is a democratic space.

Academia fails to address these issues at its own peril. By not supporting ECRs, and in resisting the transformation it so sorely needs, academia is losing the next generation of brilliant scientists who, faced with a toxic and exclusionary environment, rightly choose their wellbeing over an academic career. Those who remain, as excellent as they may be, do not make up the diverse community we desperately need to move forward. The relevance of the academy, present and future, depends on its ability to become a truly diverse and democratic space.