Aluminium compounds don’t feature on the pages of Chemistry World very often. Being the most abundant metal in the Earth’s crust and the third most abundant element, its chemistry is well established. That means it doesn’t tend to tick our boxes for being topical or unusual, and therefore newsworthy. However, we’re noticing a new strand of aluminium chemistry is beginning to flourish. 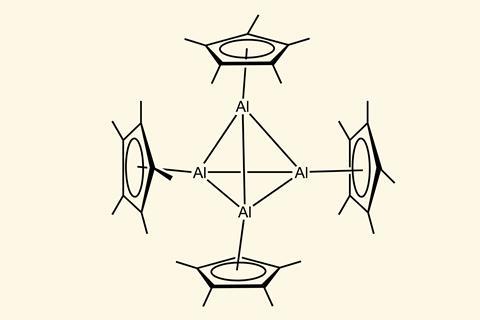 Aluminium in the +1 oxidation state, however, is less understood. It’s 30 years since chemists first made a molecular Al(i) complex that was stable at room temperature.1 And in the years following, making other aluminium(i) compounds was seen by many as purely an academic challenge.

Research we reported on back in July, however, is a powerful example of how studies involving aluminium(i) compounds are now reaching beyond blue-skies science. It shows how an aluminium(i) compound can drive the deconstruction of sulfur hexafluoride (SF6). But the method does more than breakdown the potent and persistent greenhouse gas – it’s the first example of a system that chemically recycles SF6 where the sulfur and fluorine content can be separated and re-used.

Towards the end of last year, you might recall us covering research on an aluminium(i) complex that was found to selectively attack biphenylene’s benzene rings while ignoring its antiaromatic centre. Selectively cleaving stable aromatic units in the presence of more strained ring systems with weaker bonds had never been observed before and is attributed to the aluminium(i) complex’s unique singlet carbene character.

It’s compelling to see how chemists have become more adept at making stable aluminium(i) compounds, but also how studies are evolving to exploit their unique reactivity and make new reactions possible.