The first stable dialumene – a molecule with an aluminium–aluminium double bond – has been made in the form of intensely purple crystals.

While double- and triple-bonded compounds of the other group 13 elements – boron, gallium, indium and thallium – are already known, the corresponding aluminium double bond has so far eluded scientists. Aluminium’s preferred oxidation state is +3; in a neutral dialumene, however, the metal would be in a +1 oxidation state. The few existing +1 aluminium compounds, all of which only have an aluminium–aluminium single bond, are extremely reactive and break apart into Al(0) and Al(III). 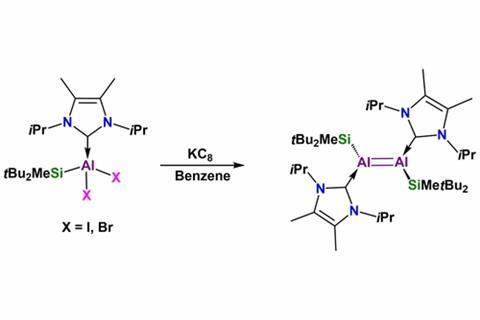 Shigeyoshi Inoue and his team from the Technical University of Munich, Germany, made the first aluminium analogue of an alkene by combining two sets of stabilising substituents at each end of the double bond: a big silyl group and an electron-donating N-heterocyclic carbene. The aluminium–aluminium bond is the shortest ever observed, as well as having the most double bond character, according to its 1.7 Wiberg bond index, a measure of bond order.

The dark purple dialumene is surprisingly stable as long it doesn’t get exposed to air, water or certain solvents such as diethyl ether. When reacted with ethene and phenylacetylene, the aluminium–aluminium double bond reacts just like its carbon cousin in a [2+2] cycloaddition.

Inoue’s team is now subjecting their dialumene to other chemical transformations in the hope of finding new organo-aluminium compounds that might catalyse reactions or yield functional materials.