Researchers in the UK have developed a fast and mild method for deconstructing SF6. The method converts the potent greenhouse gas into stable aluminium(iii) fluoride and sulfide compounds, which can serve as nucleophilic sources of F− and S2- in further reactions to make valuable organic products. 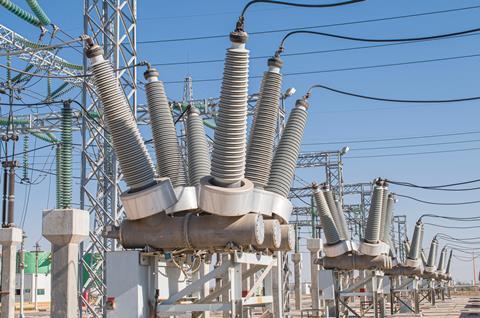 Due to its highly inert nature and excellent thermal conductivity, SF6 is used in industry as an electrical insulator in circuit breakers, transmission lines and transformers. However, this inert nature originating from its high symmetry means the activation and decomposition of SF6 is extremely challenging. SF6 is estimated to have a global warming potential 23,900 times greater than CO2, and while its inertness makes it a useful gas here on Earth, once released into the atmosphere SF6 will remain there for thousands of years.

‘The main issue is that there is no conventional and accepted method for the destruction or recycling of SF6 produced in industry,’ explains Daniel Sheldon, who developed the method at Imperial College London with Mark Crimmin. Thermal decomposition of SF6 requires temperatures over 1100°C; decomposition by electric discharge can also be used, but both these methods can produce toxic or corrosive byproducts. Activation of SF6 often requires transition metals or strong reducing agents so there remains a demand for mild and efficient methods for recycling or destroying SF6 to prevent its release into the atmosphere.

Crimmin’s group had previously used an Al(i) compound for activating fluorocarbons, which Crimmin and Sheldon have now put to the test with SF6. First they added SF6 to a C6D6 solution of the Al(i) compound with a supporting ligand ([{(ArNCMe)2CH}Al], where Ar = 2,6-di-isopropylphenyl) at 22°C. Within 15 minutes, the Al(i) compound was consumed and they observed the formation of a fluorinated product ([{(ArNCMe)2CH}AlF2]) by 1H and 19F NMR spectroscopy. They also noticed a colourless precipitate form, which was undetected by NMR. On repeating the reaction with slow SF6 diffusion to obtain single crystals of the precipitate, they identified a sulfur-containing byproduct by x-ray diffraction.

‘The fact that the products separate by themselves makes the further transformation of the resulting aluminium fluoride and sulfide much more practical,’ comments Ching-Wen Chiu, an expert in main group organometallics at National Taiwan University.

‘Given its notable chemical inertness, we were pleasantly surprised at the ease of reactivity of SF6 with the Al(i) compound,’ says Sheldon. Crimmin and Sheldon investigated the mechanism using DFT, calculating the pathway of deconstruction via multiple S–F bond cleavages. These calculations highlighted a nucleophilic attack mechanism that differed from most previous reports of single-electron transfer to SF6. ‘This contribution illustrates the vast untapped potential of main group metal compounds to activate small molecules in a way that, for decades, has been considered to be the exclusive domain of transition metal chemistry,’ notes Eva Hevia, whose research at the University of Bern in Switzerland explores polar organometallic chemistry.

‘More recently, the field has focussed on developing reactions that allow the onwards use of the fluorine and sulfur of SF6, thus creating a way to re-use the atomic content,’ says Sheldon. Here, they were able to use the aluminium(iii) fluoride and aluminium(iii) sulfide products to transfer sulfur and fluorine to useful organic products, such as acyl fluorides and a sulfur heterocycle.

Sheldon and Crimmin plan to extend their methodology to tackle the deconstruction of other industrially-relevant and environmentally-persistent fluorinated gases.