‘More women in science! More female group leaders and professors!’ For years these calls have reverberated in and around the corridors of academia. But those of us who support these calls are increasingly exasperated at how far we are from our target.

The problem is often misdiagnosed as women’s lack of interest in scientific careers, but women’s enthusiasm for science is at least equal to that of men. The issue is not one of female recruitment to science, but of relative attrition: from postgraduate level onwards, women drop out of academia (and science careers) at a much higher rate than men,1 so that the top levels become overwhelmingly dominated by men.

Many attempts have been made to redress the balance. Some advocate a top-down approach, with quotas for female representation at the highest levels. But these draw from lower levels, lacking quotas, from which women have already been depleted.

Others favour a bottom-up approach, hoping that injecting more women at undergraduate level will boost representation at the top through sheer weight of numbers. This strategy has been very successful in the life sciences, where female students are now the majority, even up to PhD level. But flooding a crowded labour market with life science graduates poses its own problems. Is it really fair to attract scholars, in particular potential mothers, to fields with such limited job prospects? Do these recruitment programmes help women or lead them into a trap?

Ultimately, quotas and recruitment drives, though well-intended, address only the symptoms of the problem. The problem itself is risk. 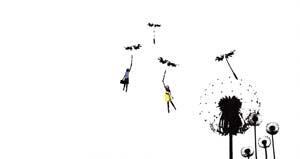 Women are generally less likely to gamble with their careers,2 and pursuing an academic career is a gamble. The fledgling academic is an itinerant worker, pursuing a series of short-term posts, foregoing stability, security and pension pots for hopes of a permanent position that may never arrive. And at each stage, the scientist gains specialisation and loses flexibility; becoming less suitable for, and less willing to take, entry level positions. The worst-case scenario, too frequently seen, is a well-educated person in their late 30s, jobless or in poorly paid roles because they can’t find suitable work.3

Of course, some risk is unavoidable, and standards must remain high – academia should not be an easy ride. But how can we reduce risk while continuing to reward success over failure?

We suggest that the best way of getting women into academic science is by helping them to leave it, if and when the time comes: an exit strategy.

Undergraduates, and to a certain extent PhD students, are supported to make career choices, and employers will specifically seek to employ them. But postdoctoral researchers are in a different position, with an increasingly narrow specialisation and diminishing desirability for industrial recruiters.

Offering exiting postdocs training to find a new role outside academia would help them land on their feet. This could be, for example, a programme of coaching and training, followed by internships in relevant industries or government institutes to get hands-on experience and make contacts. Internships that should, ideally, be matched with vacancies, regulating the balance between supply and demand of newly trained people.

Of course this would cost money – money that could be spent on training others who have not received so much education. But academics are in a unique position to benefit from retraining and thereby provide benefits to wider society.

They have proven intelligence, analytical skills and perseverance that, when supplemented with industry-specific training, could soon see them providing much greater returns on the investment through the value they generate and taxes they pay.

There is also a moral case for assisting those who have given large parts of their lives to research and education (functions essential to so much of the global economy) only to find themselves stranded. Funding bodies should recognise that fair treatment of academics is part of the price one must pay for the benefits of education and research.

And of course, it’s not just women who lose out when the gamble doesn’t pay off. Everyone entering academia would benefit from a soft landing when they leap from the ivory tower – female scientists aren’t the only ones with families to feed.

Karin Bodewits co-founded ScienceMums with Philipp Gramlich, who is also team leader for R&D at Eurofins Genomics. Adam Wilson is a freelance writer