There’s little love lost in the commercial world of strawberries 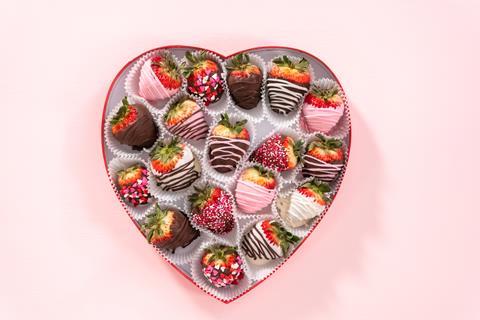 This Valentine’s day, show someone you love them by not unlawfully commercialising their strawberry cultivars

The strawberry’s connection to Valentine’s day might be because this berry has a long history as a symbol of love, passion, righteousness and sensuousness. Strawberries might mean love is in the air, but on the ground these berries have been ensnared in scandal. One would think these would be sensational tales of breach of promise. Rather than heartbreak, strawberry scandals involve broken patents.

A hybrid of the octoploid species South American Fragaria chiloensis and North American Fragaria virginiana, the cultivated strawberry Fragaria × ananassa1–3 ‘is one of the most economically important fruit crops in the world’.4 Cultivating varieties of Fragaria × ananassa that produce more fruit, can weather non-ideal growth conditions and are resistant to diseases is big business.5–7 Each cultivar could be a cash crop. Thus, many cultivars are patented. But much like forbidden love, forbidden plants are often pursued with little regard to strictures.

One such forbidden plant was the Italian patented Fragaria × ananassa cultivar Marmolada, registered in 1984 by the Consorzio Italiano Vivaisti (CIV). A group of farmers were suspected of unlawfully reproducing and commercialising Marmolada, resulting in a lawsuit. As in many criminal and civil legal actions, DNA analysis brought clarity to the case. Like many other plant cultivars, Marmolada strawberries reproduce asexually via micropropagation, resulting in genetically identical offspring.8 DNA testing the plants in question would reveal if any of the suspected farmers indulged in forbidden fruit.

Random amplified polymorphic DNA (RAPD) uses short PCR primers of random sequences to anneal to various regions of the targeted genome.9,10 The expert comparison of RAPD amplification product patterns post electrophoresis has been used for decades as a fast, easy and inexpensive way to authenticate economically important plant foodstuffs.10–12 In the Marmolada case, the court sent 31 plants for analysis by a team of scientists from Italy’s University of Ferrara and University of Pavia. The team identified 13 of the plants as Marmolada as their profiles were identical to the patented plant. The other 18 plants were not Marmolada – something the court knew in advance because they ‘mixed the 13 plants … with another 18 plants belonging to different varieties’ and did not tell the scientists.6 Shakespeare wrote ‘lovers cannot see the pretty follies that themselves commit’. In this case, DNA analysis revealed the farmers’ folly.

Years later, DNA analysis would reveal a new strawberry scandal involving a major US university, two researchers, their start-up, and the world’s largest berry company. The Public Strawberry Breeding Program of the University of California, Davis, plays a huge role in the berry economy. In nearly 80 years, UC Davis has developed scores of strawberry varieties of such desirable qualities that campus cultivars came to dominate the strawberry farming business, accounting for 80% of North American and 60% of global strawberry crops. Given the money – along with the scientific and technological challenge – it is no wonder that start-ups spin up to take a bite of the strawberry market. One start-up perhaps best set-up for success is California Berry Cultivars (CBC), started by two renowned UC Davis professors when they retired. For 22 years, these professors had run the UC Davis breeding programme. This previous experience and access seems a boon – but it led to legal bust-ups.

In 2016, CBC sued UC Davis for access to the professors’ work, including cultivars developed. UC Davis countersued CBC, basically alleging the ex-professors stole strawberries, playing fast and loose with university patents. DNA analysis of CBC strawberries proved a turning point in this billion dollar legal battle. The court heard that of those CBC strawberries analysed, the vast majority could be genetically linked to UC Davis controlled cultivars. About this berry reveal, one of the retired professors stated during cross-examination that the forbidden breeding of protected cultivars was possibly ‘a major mix-up of materials’. Opposing counsel told the jury, ‘don’t let them fool you’. The jury sided with UC Davis.

The university and CBC reached an agreement in 2017 that makes it clear that UC Davis owns the strawberry varieties developed in its breeding programme, CBC must return any purloined plants or seeds, and that CBC will make sure its berries are – in fact – its own. Section 3.7 of the settlement, titled ‘Strawberry Germplasm Compliance Assessment’, includes directions on how DNA analysis will be conducted to ensure that CBC’s strawberry breeding is on the up-and-up.

Just when CBC thought it was safe to go back to the strawberry patch, a new lawsuit sprouted in spring 2019 from Driscoll’s, the largest berry company in the world. Driscoll’s claimed four of its patented varieties found their way into CBC’s breeding program without permission. The presiding US District Court judge tossed most of Driscoll’s claims in summer 2021, indicating that Driscoll’s suit lacked ‘factual content’. CBC is not out of the woods yet. The judge let Driscoll’s claim of declaratory relief – a judgment to ‘define the rights and duties of Driscoll’s and defendants’ – stand.

Perhaps the course of strawberry cultivation, like true love, never does run smooth.