Beware of the troll

Would good social media laws make good people? Or is the underlying economy of anonymity a run-away train?

The birth of social media and its rapid rise to power over the past decade has transformed public discourse about science. Its influence is a strange mix of paradoxes: immediate and endless, permanent and mutable, influential and trivial, democratic but delivered through a few monopoly platforms, credible until it explodes with incredulity. For those that participate, there are more connections to be made, more conversations to join, more opportunities for researchers and scholars to share, collaborate and discover than in the offline world. However, there’s more of the bad and, at times, downright ugly stuff as well.

Kent Anderson, writing for The Scholarly Kitchen, has described this milieu as the ‘trance of dysfunction’. He writes in the context of ‘trolling’ – posting inflammatory, off-topic or inappropriate comments to disrupt a discussion and provoke outrage, usually for no purpose other than the troll’s own amusement. Anderson boils his thesis down to two factors – economy and technology. We’ve reduced the cost (or consequence) of being a troll to near-zero while the platforms on which the trolling occurs enrich themselves with every click. 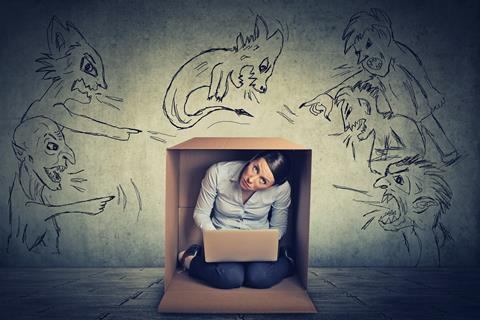 Social media companies don’t have the same responsibilities as traditional media for the content that it is distributed via their technologies. US-based companies, such as Twitter and Facebook, operate under the Digital Copyright Millennium Act where they are considered platforms for users to create and share content, rather than media businesses that publish content and must therefore take the flack for it. Furthermore, their business models generally centre around wringing advertising revenues from high volumes of users. Anything that drives traffic, clicks and comments in turn drives their profits. Trolling is good for business.

Scholarly publishers on the other hand have businesses that rely on reputation, quality and integrity, where revenues derive from article processing charges and subscriptions. That’s where we operate too. Our subject matter is scientific – most of our interactions have the civility (and good humour) of reasoned discussion and debate.

That’s not to say scientists/scholars are above trolling. Some real examples of it were collected a few years ago by Kelli Marshall for an article she published in the online education magazine Synapse. It’s the tone that is most surprising – often trolls are questioning a perceived lack of evidence or expertise, but communicating this with snark and puerility. This would make it difficult for any machine-based method of moderation to detect and block or remove such comments – no swear words, just plenty of sneering. It’s dispiriting to think that we need algorithms to keep us civil online, that human interaction descends to name calling if left unchecked by computers. We use actual people to moderate our social media and commenting – admittedly, we have less of it to deal with than larger outlets – but our Facebook page can still get a little frisky at times. We tend to adopt a policy of not feeding the trolls.

Chemistry World is lucky to enjoy large social media communities. It’s rare for us to encounter trolling or anything untoward. Of course, we invest heavily in science communication – you can read the essays from the finalists of our recent competition  – so we probably care a little more about it than most. We publish errata, we let you know when mistakes were made. Sometimes that can be a little embarrassing. But I wouldn’t trade that accountability for all the twits in the world.