Chemistry to the rescue

Can research have real impacts on international development?

Rural Tanzania is perhaps not the first location that springs to mind as ideal for an ammonia manufacturing plant. The Haber–Bosch process used to make the stuff needs huge amounts of power and several atmospheres of pressure. Not so easy to do in regions of Africa that lack an electricity grid.

It would be nice if it was possible to make ammonia in such places though, as the benefits of producing fertiliser locally would be enormous. All African countries except Nigeria import their ammonia, making fertiliser more expensive than it needs to be.

So I was excited when I read a paper in Science earlier this year in which Stuart Licht of George Washington University, US, proposed a way of making ammonia that could operate off-grid. The method involves bubbling steam through a cheap molten salt peppered with nanoscale iron particles, and is powered by a solar panel.1 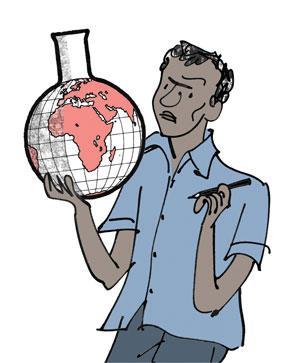 But how likely is it that research findings of this sort actually produce an impact in poor countries? It’s important to ask this because many international development agencies are ramping up their spending on research – the UK government’s Department for International Development (DFID) more than doubled its research spending in the six years to 2012, for instance. And this year will also see the UN approve new development goals that will guide the priorities of those working for international development until 2030.

Stepping back from off-grid ammonia synthesis for a moment, it’s helpful to think about how research might foster development. A DFID team outlined four possibilities in a review published last year. Research might build evidence that informs political decisions. It might build human capital. It may contribute to boosting a nation’s economy. Or it could result in technologies that improve people’s lives. Chemistry has a role in each of these, but going back to ammonia synthesis, it’s the last point that’s relevant.

Looking at researchers’ performance in this area, the DFID review found something of a dichotomy. On the one hand, some research had led to sweeping and obvious benefits. The scientists who developed modern maize varieties helped remove a million people from poverty in the last decade. And there is good evidence that insecticide-impregnated mosquito nets dramatically improve the health of women and children.

On the other hand, there is the infamous example of the ‘playpumps’ – water pumps linked to a roundabout that were supposed to take the drudgery out of pumping water from wells. Assessments showed that it took hours of roundabouting to pump up adequate water, which sometimes meant children had to be paid to play. Many now lie abandoned and rusting. Another example is the clean burning stoves developed to avoid women having to inhale smoke while cooking on an open hearth. Women often didn’t use them because they preferred cooking the traditional way: the food is tastier, they reckon.

In short, researchers are often capable of coming up with a solution that fits the brief in all parameters except cultural ones.

Encouragingly, there are great examples of engineers consulting with the right people early on, so that these problems can be identified. As far as I know, much less work has been done to consider how local people can be engaged during the development of chemical technologies designed for the developing world. It is time chemists started considering this question. It would be a tragedy if a potentially transformative technology like an off-grid Haber process didn’t make an impact in Africa because no one wanted to use it.