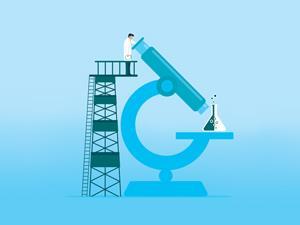 Just as alchemists sought to mutate materials in their eclectic array of vats and crucibles, chemists now seek to transform elements, but with atomic-scale precision. Huaxue, the modern Chinese word for chemistry, literally translates to mean the ‘science of material change’. But the science of change is changing itself. It’s evolving. And chemists are no longer playing by reactions’ rules.

At school, we’re taught to steer reactions by tinkering with thermodynamic parameters like temperature and pressure, or by adding a catalyst. Now researchers are manipulating molecules in ways they had only dreamt of a few decades ago.

You might recall that last month we brought you a story on how scanning probe microscopy (STM) can help to flip a Bergman cyclisation reaction back and forth. The researchers cleaved and created particular carbon–carbon bonds within an enediyne compound by applying voltage pulses from the STM needle’s tip. This month we have more examples of flipping the switch on conventional chemistry.

Here you’ll find out how an electrostatic field will speed up a Diels–Alder reaction, turning received wisdom that electric fields can only influence redox reactions on its head. Before, chemists’ main choices in manipulating reactions were the reactants and, to a degree, the reaction conditions they used. But new experimental tactics are increasing our control over chemistry. We can now direct chemical syntheses at the most basic level.

Adding to that, chemists can now see what they are doing better than ever before. Take a look at how scientists have trapped a water dimer within a fullerene cage to get a good look at its hydrogen bonds.

In the past, our investigative arsenal was scrambling to keep up with the dynamic nature of chemical bonding. Before and after pictures left chemists to hypothesise what happened in the middle. Now, advanced spectroscopic tools and ultrafast lasers furnish chemists with the ultimate tools for spying on reactions. This degree of surveillance is a relatively recent luxury but there is so much knowledge to be gained from watching reactions on the molecular level.

Chemistry has a responsibility to maximise the efficiency and reliability of all reactions. Increasing control is an important step in achieving a sustainable future not just for our science, but for our planet. At the moment, we’re limited to simple reactions with small molecules. Selectively making and breaking bonds on a large-scale is still a long way off. But if you compare how far we’ve come in just the past few years, the future certainly looks promising.