Humans have been preoccupied with purity for thousands of years 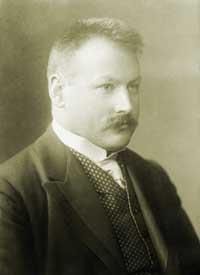 Swiss biochemist, 1877-1950. Sometimes credited with inventing the vacuum drying pistol for removing water from sensitive samples, but perhaps better known as the fraudster behind ’abwehrfermente’

Humans have been preoccupied with purity for thousands of years, using elaborate rituals and exercises to become morally spotless. Alchemy itself was as much a spiritual as a material quest, with the practitioner using evocatively named techniques - lixiviation, crystallisation, dephlegmation, sublimation - to move their creations, and themselves, to suitable purity levels.

With the moral character of matter being so important, even today most experimental procedures are as much about purifying products as mixing reagents. Ultimately, the aim is to have a phial filled with a material whose composition corresponds precisely to the molecular formula.

But there is a fly in the ointment. Isolation from solvents can lead to solvates; there is also the inevitable concern that water, that stickiest of molecules, might foul the analysis. While oven drying and calcining are fine for refractory inorganics, in the kinetic trap that is organic chemistry, the fragility of the molecules means that freeing them from water must be done under gentle and carefully controlled conditions. A classic method is the vacuum drying pistol, an apparatus sometimes connected with Emil Abderhalden, a biochemist born in the canton of St. Gallen, Switzerland in 1877.

After medical school in Basel, Abderhalden moved to Emil Fischer’s Berlin lab in 1902 to work on the synthesis of peptides using the newly discovered protease enzymes. By 1908 he was professor of physiology at the Veterinary School in Berlin. Highly ambitious, Abderhalden needed a strategy to make his name. Like many before him, and since, he decided to produce a textbook. Abderhalden’s Handbook of biochemical methods  first appeared in 1906 and would run for some 25 years under his editorship without his ever writing more than the introduction. It was here that the drying pistol first appeared, in the chapter on elemental analysis written by one of his students, Carl Brahm, and lecture demonstrator J Wetzel. 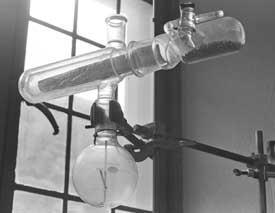 Staring down the barrel: the vacuum drying pistol

The pistol consists of a cylindrical double-walled vacuum chamber (the barrel) sitting between a flask containing solvent below, and a reflux condenser above. A flask with a bent neck (the handle), loaded with a drying agent, completes the setup. Samples are placed in the barrel, which is then evacuated and maintained at a precise temperature by the solvent vapour at reflux. 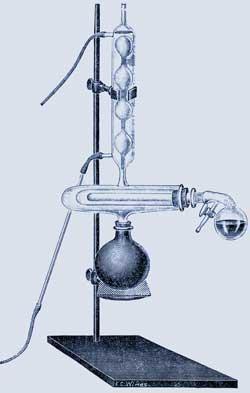 To become really famous, Abderhalden needed a splash. In 1909 he reported the isolation of defensive enzymes (abwehrfermente), which he argued were produced by higher organisms exposed to foreign proteins. He and his co-workers soon reported that these could be isolated from pregnant women as a reaction to the ’foreign’ placenta. This was sensational stuff, and soon further medical tests based on his protocol were being reported. By the 1930s his test was being used to identify schizophrenia and classify sheep according to race. In 1943 Josef Mengele began carrying out experiments based on abwehrfermente at Auschwitz.

Abderhalden was lionised in Germany. He was nominated 51 times for the Nobel Prize and named Director of the Kaiser Wilhelm Institute in Halle.

Unfortunately, Abderhalden was a fraud. A young academic of Jewish extraction, Leonor Michaelis, failed to reproduce the work. Michaelis was no stranger to enzymes, having unravelled the kinetics of enzymatic reactions with Maud Menten. However, even after a spell in Abderhalden’s lab, he could not distinguish between samples from men and women, let alone tell if they were pregnant. Michaelis was not alone - several other groups had similar problems, and Abderhalden’s test soon fell into disrepute abroad. While others could move on, Abderhalden was so powerful that Michaelis was unable to find work, let alone funding, eventually leaving Germany for the Rockefeller Institute in New York.

Abderhalden, by contrast, flourished. Apart from his dubious research, he wrote textbooks, edited a journal on ethics, and became president of the Leopolina Academy, overseeing the gradual withdrawal of membership from Jewish scientists.

After Abderhalden’s death in 1950, his test continued to be used in Germany by a few of his students. Even today, through the miraculous echo chamber of the internet, his fraud lives on, given legitimacy by alternative medicine websites. Despite his research eventually being thoroughly rejected by the scientific community, Abderhalden’s name can still be found in catalogues alongside this ingenious device.