There was a time, long ago, that few of us remember, when you couldn't just head down to the basement and get a quick NMR or mass spectrum of your latest compound

There was a time, long ago, that few of us remember, when you couldn’t just head down to the basement and get a quick NMR or mass spectrum of your latest compound. Elemental analysis got you the composition but the structures of molecules were routinely a matter of speculation and argument. If you were an organic chemist, you would degrade your molecule step-by-step, teasing apart the functional groups until you got to a known fragment which you could identify. Had they thought of it, the organic chemists of old might have called it retrosynthesis. Nowadays, using x-ray equipment, complete molecular structures are solved in a couple of hours. Yet someone can still stump you by asking ’How do you know your molecule has that structure in solution?’, a question still popular with inorganic PhD examiners d’un certain âge. 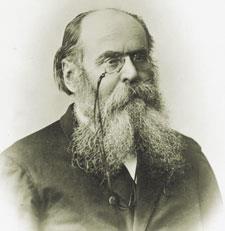 One answer is determining molecular weights in solution: a set of time-honoured but often overlooked techniques so elegantly underpinned by Raoult’s law. As every undergraduate knows, the vapour pressure of a solution is reduced by the presence of a dissolved solute. This delicate effect is betrayed by the small changes in melting and boiling points of solutions as a function of solute concentration. Measuring these changes to calculate solute molecular weights became the cornerstone of much of our understanding of how molecules gather together in solution. But the problem is how to measure the small temperature changes involved - often small fractions of a degree, too small for any normal thermometer to measure precisely.

Enter Ernst Otto Beckmann (1853-1923) was born in Solingen, the German town famed for its knives. The son of a dye-maker, he grew up with chemistry in his blood. He studied with the great analyst Fresenius at Wiesbaden and then with Hermann Kolbe in Leipzig. While working on oximes derived from ketones he discovered a curious reaction - in the presence of Lewis acids, they could rearrange to amides: a useful method of turning cyclic ketones into ring-expanded lactams. This reaction came to bear his name, the Beckmann rearrangement. 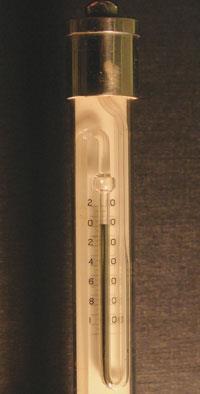 Please do not adjust your set: the Beckmann’s crucial S-bend loop

Yet the chemistry was so complex, Beckmann was led to suspect (incorrectly as it happened) that he might be isolating polymers. Raoult’s work on vapour pressures seemed to provide a means of determining the molecular weights. To do this, Beckmann developed an ingenious differential thermometer of exquisite precision.

The Beckmann thermometer looks at a distance like an oversized normal thermometer. It is usually about 40cm long. The large reservoir at the bottom has a thin capillary that runs up a scale about 6 degrees wide, graduated in units of 0.01°C. The capillary is then bent into an S-shaped loop with a second, inverted, scale between 0 and 150°C. Since there is mercury both in the loop at the top as well as in the reservoir at the bottom, the casual observer may dismiss any old Beckmanns they find as being broken.

Not at all. The section at the top is an integral part of the device, a reservoir that allows you to adjust the amount of mercury in your thermometer to make precise measurements in different temperature ranges. By heating the large reservoir at the bottom you can join the two mercury columns together. The thermometer is then allowed to cool until you are close to the freezing point of the solvent you will be working with. At this point (an operation fraught with suspense) you tap the thermometer sharply at the top with the heel of your hand to break the column of mercury in the S-bend. The mercury left in the main thermometer is now sufficiently little to move noticeably up and down the capillary in response to even 0.01°C changes in the melting point of your chosen solvent.

The ability to measure such tiny temperature differences made it possible to investigate systems unthinkable previously. Polymers were shown to have enormous molecular weights. Carboxylic acids were shown to exist as dimers in non-polar solvents, while unstable and exotic species, such as Grignard reagents and organolithiums, proved to be oligomers with fragile configurations that flicker in and out of existence as one changes the temperature or the solvent.

Beckmann went on measuring temperatures and carrying out speculative organic reactions well into old age. His last published paper concerned the reaction of sodium with benzophenone, giving the stunning blue ketyl signalling the health of solvent stills. But the kit used to unravel the nature of that is another story.