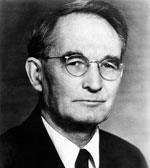 The most reductive of literary critics are wont to say that there are only seven kinds of stories. Chemistry, I fear, is deeply impoverished in this respect. Scientists do not often encounter monsters, let alone slay them. The very idea of rebirth is taboo, for the mainstream at least. Comedy, apart from the occasional lewd acronym, is thin on the ground. Tragedy - failed experiments - is generally hushed up. Rags to riches stories are confined to patents. Voyages are incidental to papers on drug discovery. And silliness - such as the infamous Berichte der durstigen chemiker gesellschaft  (the Bulletin of the thirsty chemist’s society  ) of 1886 - is nowadays not just ruthlessly expunged by po-faced editors and referees alike, but even omitted from scanned archives. All that’s left is the ’quest’, for what paper does not begin with a dream?

Percy Williams Bridgman was an unlikely visionary. Born in Cambridge, Massachusetts, US, in 1882, he was a brilliant student at his local public schools before entering Harvard University in 1900. He read and studied voraciously, completing 23 courses, compared with the customary 17 in 4 years. Graduating with the highest honours, he began a PhD. His speculative project, for which he had little or no supervision, involved squeezing materials to see the effect of pressure on their physical properties.

His first apparatus consisted of a steel screw turning in a threaded cylinder. With the aid of a two metre spanner, one could attain pressures around 3-4000kgf/cm2  - just a few thousand atmospheres, or 3-400MPa in today’s money. The twentysomething year old Bridgman realised that a little redesign would allow him to compress liquids much further. But unable to get the parts he needed, he started building his own. 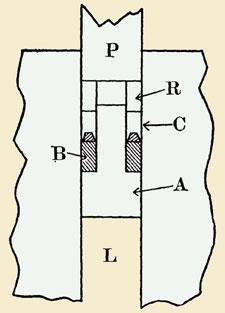 Bridgman’s biggest problem was that the materials he studied had an annoying tendency to creep round the edge on the piston, releasing the pressure. The key, he reasoned, must lie in the packing - the materials sealing the system.

His solution was as brilliant as it was simple. Between the drive piston (labelled P on the image) and the steel plug (A) in contact with his sample, he placed three rings - of hard steel (R), soft steel (C) and rubber (B) and an empty space in the centre. Upon compression, the rubber would squash longitudinally while pressing outwards against the sides of the cylinder, ensuring that the higher the pressure, the tighter the seal, but also that the pressure in the seal itself would be higher than that in the sample. Suddenly the pressures he could reach rocketed.

Bridgman explored minerals from the deep Earth under high pressures

For Bridgman a whole universe of possibility had opened. Everything he squeezed did something interesting and unexpected. Water froze into ever stranger phases. Salts changed colour. Conductivities rose or fell unpredictably.

The work was tough and dangerous. Steel apparatus would snap, firing shattered shards across the lab. Yet his small group made steady progress, building better anvils to achieve higher pressures still, growing enormous crystals of silicon from melts, exploring phase transitions and their thermodynamics, and probing the chemistry of minerals in the deep Earth. It was a brave new world, and within a few years he was carrying out routine experiments at 400 000kgf/cm2 (40GPa).

Bridgman’s rigour led him to simplify the canon of physics, searching for its soul, by first exploiting, and then showing the limitations of, dimensional analysis. His books on science attempted to plumb the meaning of what we do as scientists, and make thought-provoking reading even today. The award of the Nobel prize for physics in 1946 was a milestone, but far from the culmination of his work. While his science continued, he used his logical and reductionist approach - operationalism - to think about the relationship of the individual with society, ultimately proposing a utopian vision that was highly controversial.

In 1961, he was diagnosed with severe bone cancer and within months was crippled and in intolerable pain. Seeing no future, Bridgman, ever self-reliant, shot himself at home. A note was found in his pocket, saying, ’it isn’t decent for society to make a man do this thing himself. Probably this is the last day I will be able to do it myself.’

For Bridgman the quest was over. But he had opened doors, leaving others to explore the densest reaches of our world and to ponder the most profound ethical of dilemmas. However you classify it, it is one of the most gripping science stories ever told.