In the name of effective multi-tasking, modern technology tries to combine as many functions into one small gadget as possible 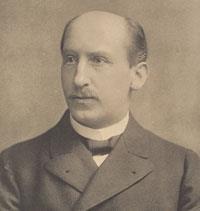 In the name of effective multi-tasking, modern technology tries to combine as many functions into one small gadget as possible. For a couple of hundred pounds or the privilege of being locked into a non-negotiable contract, you can easily pick up a one-object phone, camera, computer, music and video player, radio, and satellite navigation system, all small enough to be routinely left behind on a train.

This same multi-tasking urge has driven a number of innovations in glassware – not least from Ludwig Claisen, a name very familiar to organic chemists. Claisen was born in Cologne in 1851 and studied at Bonn with August Kekulé, where his interest in carbonyls and enolates was kindled. In 1881 he published a seminal paper on what would become known as the Claisen-Schmidt reaction, a crossed aldol condensation. In 1886 he joined the group of Adolf von Baeyer, where he reported the condensation between an ester and a ketone, the Claisen reaction, which remains a cornerstone of organic synthesis.

Ironically, given Claisen’s future penchant for invention, von Baeyer was very reluctant to see novel chemistry gadgets introduced in his Munich lab. When water-driven overhead stirrers became available, his students banded together and decided to install them in secret during the night, and then present their boss with a fait accompli. The next morning when Baeyer came on his rounds he scowled at the clattering equipment. Without a word, he left the lab, and went home to get his wife, Lydia. Her enthusiasm was immediate. ‘What a wonderful way to make mayonnaise,’ she gushed, and Baeyer was forced to capitulate.

Claisen accepted the Chair of organic chemistry at Aachen in 1890. Vacuum distillation had only just been invented, and was one of the most difficult operations for a chemist. The issue was bubbles: under vacuum, anti-bumping granules – those essential sources of heterogeneous nucleation – became semi-useless. Distillations became a nightmare of maddening, frothing frustration alternating with heart-stopping bumps that dumped half the contents of the still-pot across to the receiver.

In 1867, an obscure Italian chemist, Pietro Pellogio, introduced the idea of inserting a capillary into the flask alongside the thermometry, so as to introduce a thin stream of bubbles into the liquid, smoothing the boiling process. Claisen’s successor at Bonn, Richard Anschütz, published a monograph on vacuum distillation in 1887, proposing that the thermometer be placed inside a Pasteur pipette inserted through a cork at the top of the flask. It was all very fiddly.

Claisen’s solution was to design a flask with, in essence, two stillheads stacked one above the other – the first to hold the capillary and the second for the thermometer. Though buried in an 1893 paper on ketones, it was soon widely used. It was so clever that the following year a chemist called Lederer published something similar in the Chemisches-Zeitung without giving Claisen credit. Claisen responded with a measured but firm letter to the editor drawing attention both to his original paper and to one in which William Perkin Jr. in England had remarked that it was ‘very useful’.

Claisen moved on to Kiel but health problems soon obliged him to resign. After a short spell in Emil Fischer’s Berlin institute, he retired to the small town of Godesberg, where he set up his own home laboratory. This was no mere bottom-of-the-garden shed – it was fully kitted out, and Claisen continued to do serious science. In 1912 he discovered the first sigmatropic reaction – the Claisen rearrangement, the conversion of allyl vinyl ethers to  g,d-unsaturated ketones. Claisen continued to publish until four years before his death in 1930.

The decreasing scale of reactions carried out in labs mean that Claisen flasks and adapters are less familiar these days. I once saw a student doing a distillation in a Claisen flask sporting two thermometers – when I asked him what the second thermometer was for, he looked at me as if I were a Martian. ‘I’m not really sure,’ he replied. Claisen would not have been impressed.