I normally cycle to the lab. Aside from the pleasure of seeing the sky, and the Zen discipline of spinning the pedals, I also avoid the underground. At rush hour, we find ourselves swept along the tunnels by the sheer mass of people until, miraculously, we emerge blinking into the street where our mean free path suddenly increases by orders of magnitude. 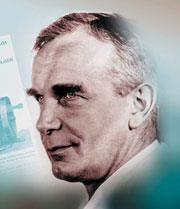 In many ways, the pumping of gases is little more than mass transit for molecules. The earliest air pumps were precursors of today’s bicycle pumps - piston driven affairs with flaps for valves. Sprengel’s mercury dropping pump (Chemistry World  , February 2008, p67) changed things considerably, with drops of mercury sliding down a capillary acting as a conveyor belt to ease packets of gas molecules out of the vacuum system.

But the growing electrical light bulb, x-ray tube, and radio valve industries meant that faster and more robust pumps were in great demand. One man, almost single-handedly, brought vacuum down in pressure by several orders of magnitude and accelerated the process by several more.

Wolfgang Gaede is hardly a familiar name outside the narrow circle of high-vacuum aficionados. He was born on the outskirts of Bremerhaven, Germany, in 1878, the son of an army officer. Like any army brat, he moved home repeatedly as he was growing up, ending up in Freiburg when his father retired. He studied medicine before switching to physics, graduating at 23, and began to study the Volta effect - the appearance of a potential when different metals are placed in contact.

Concerned about contamination of the sample surfaces, he began to work under vacuum. His Sprengel pump was too slow, so Gaede set about designing a better, faster pump. Abandoning glass, he came up with a design based on a metal cylinder enclosing a rotating porcelain drum (which he had specially constructed by the Royal Porcelain works in Berlin). The assembly was sealed with 26kg of mercury. The pump worked first time and gave astonishingly good results. 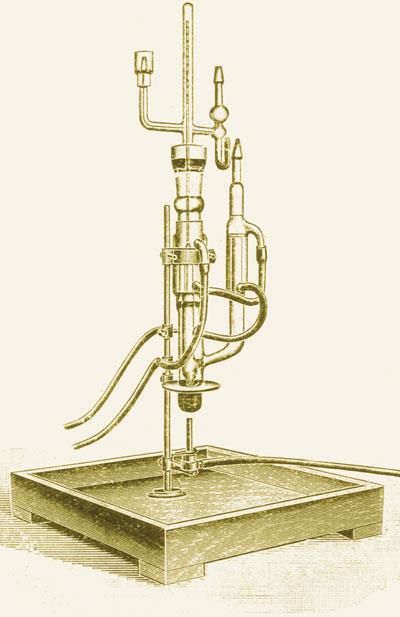 Presenting his machine at a conference in Meran (now in Italy), he immediately got 60 orders. In 1907, overwhelmed by demand, he teamed up with the firm of E Leybold’s Nachfolger who sold them in their hundreds.

By then Gaede was studying diffusion in gases. His studies led him to a very cunning invention - what he called a ’molecular air’ or screw-thread pump - in which a tightly fitting screw in a cylindrical housing was rotated rapidly, dragging the molecules along. In spite of some design flaws and a low rotation rate, the pump could attain a vacuum below the limit of his McLeod gauge. The idea was some 30 years ahead of its time.

But Gaede was intrigued by a theoretical problem. Textbooks had it that a mercury pump could not attain a vacuum lower than the vapour pressure of the element itself. His experiments showed the opposite. If the dimensions of the system were right, a flow of mercury in one direction could produce a drop in air pressure the other way. He therefore built a prototype in which mercury was boiled and the vapour flowed through narrow slits to land on a condenser beyond. It worked. Manufacture by Leybold began in 1913 and the pump, though slow, sold very well.

But Irving Langmuir, working for General Electric in the US, saw Gaede’s paper and immediately spotted a way of improving the pump - in his design the blast of mercury vapour was directed by an umbrella-like arrangement towards the water-cooled walls, entraining air molecules with it, much like the leaves moved by popular garden blowers. The speed of the pump, particularly at low pressure, was fantastic and diffusion pumps, increasingly with oil in place of mercury, became the norm in high vacuum systems.

Gaede may have been disappointed by Langmuir’s improvements, but this did not stop him designing more pumps with Leybold. However, in 1933 he was denounced to the Gestapo for referring to the Nazis as ’Kindsk?pfe’ (child-brains) and was obliged to retire. He won many awards but never worked again. Gaede died in 1945, but he had one last ace in his sleeve - the idea of a ballast valve for oil pumps. Published posthumously, it suggested that flushing air through the oil would free it of emulsified moisture. No rotary pump today is without one.

So when, from time to time, I find myself in the rush-hour crush, my thoughts turn to Gaede and his miraculous pumps.