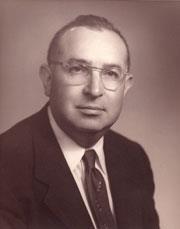 Balances are fundamental tools for chemists. But in Western art the archangel Michael, represented with a sword and a pair of scales, is no chemist - on the day of Judgement it is Michael who weighs the souls of the departed, splitting the righteous from the unworthy. It is a tough job, even for angels.

But in times of war, choosing the righteous path is never easy. Frederick Abel and James Dewar invented cordite; Fritz Haber pushed poison gas; and Emanuel Benjamin Hershberg is another case in point.

EB, as he became universally known, was born in Lynn, Massachusetts of German Jewish extraction. He studied chemistry at the Massachusetts Institute of Technology in nearby Cambridge and stayed on for his PhD in organic chemistry with Ernest Huntress. His flair in the lab was soon evident. He published more on apparatus - a sodium cutter, a pressure regulator - than on actual synthesis.

After a short post-doctoral stint in Switzerland, Hershberg returned to the US with a fellowship to Harvard University in Cambridge, becoming Louis Fieser’s right hand man. Over the next few years they would publish a series of key papers on the chemistry of polycyclic aromatics. In 1936, EB published a short note proposing an efficient stirrer for the viscous mixtures that some of his reactions required. It was nothing more than an overhead stirrer furnished with long twisted braids of nichrome wire, stiff enough to sweep through slurries, yet flexible enough to fit through a ground glass joint, and soft enough not to scratch the glass. When I first encountered the stirrer, the wire was lovingly braided for me by my supervisor. We used it to whip a mass of sodium metal in boiling toluene to a froth of shimmering droplets, which cooled to a slurry of fine, pinky-grey sodium sand. 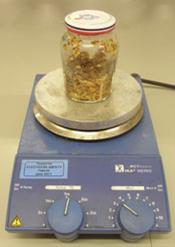 Hershberg’s skills as an experimentalist and glassblower were such that Fieser entrusted him to write the practical sections of his numerous textbooks. They are a joy for the clarity of the text and the perfection of the illustrations. More apparatus would follow, including a mercury-free seal for stirrers, a dropping funnel and much besides.

When the US entered the second world war, scientists were encouraged to apply themselves to the war effort. Hershberg, alongside Fieser, was seconded to the National Defense Research Committee and assigned to incendiaries. In the presence of oxygen, divinylacetylene was transformed into a sticky, highly flammable gel - when lit with a match, the material ’burned with a sputtering spectacular flame’. But it was hardly a molecule to be mass-produced. The British were working on incendiary gels based on rubber dissolved in petrol, but when supplies of rubber dried up after the attack on Pearl Harbour, attention shifted to other thickening agents. After many attempts it was found that salts of long chain fatty acids - palmitic acid soaps - added to petrol solutions of aluminium naphthenate gave the right consistency, and the name napalm stuck. Fieser and Hershberg also optimised TNT-phosphorus bursters, and napalm would be air-dropped or used in flamethrowers in both Europe and the Pacific.

Later, napalm changed. With the addition of polystyrene it became a sticky material, widely used as an anti-personnel weapon, something that Hershberg viewed with distaste or even revulsion. During the Vietnam war, the infamous photograph of the girl Kim Ph?c fleeing an air attack at Trang Bang would forever associate napalm with horror. 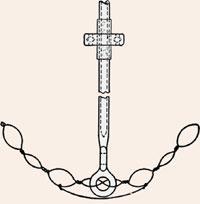 In 1945 Hershberg became director of research at Schering in New Jersey and left Harvard for good. It was an exciting time to work on steroids, and pharma companies raced to develop new drugs. EB’s small team would make huge strides in steroid chemistry, in spite of working from labs in converted garages. Most famously, they discovered that microbial oxidation of cortisone gave prednisone, the first systemic corticosteroid that could be used to treat a wide range of diseases from rheumatoid arthritis to lupus and cancer. It was a blockbuster that remains available to this day. Beta- and dexamethasone would follow. Antibiotics like gentamycin also emerged under his watch. Throughout, EB led from the front, a quiet and inspirational team leader, never far from the bench or the glassblowing torch.

When he retired from Schering, he did consultancy work on carotenoids as food additives and on steroids. His son Robert, also a chemist, worked beside him at the bench and was in awe of his grace in the lab: ’It was like watching ballet’.

Hershberg died in 1987, and in 1991 Schering-Plough endowed an award in his name for outstanding discoveries in medicinal chemistry. Should we ask how the scales balance? Hindsight gives the illusion of clarity. But life is never that simple

Thanks are expressed to Robert and Elliot Hershberg, A K Ganguly, and Frank Bullock for assistance with this article.