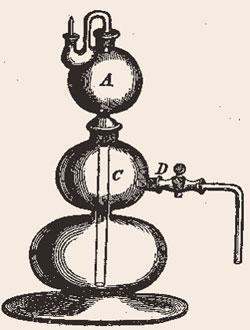 If there’s one piece of glassware other than a conical flask that spells the word ’chemistry’ in the minds of most people it is Kipp’s apparatus. Everyone has seen one. Those three bulbs stacked on top of each other with an outlet from the middle section and many of us, no doubt, saw one used in school to generate gases - even if gas cylinders are now favoured in laboratories. I will never forget my first encounter with one: a teacher, who taught PE rather better than chemistry, used it to make hydrogen using zinc and hydrochloric acid and then decided to show us the ’squeaky pop’ by applying a match at the gas outlet. It was the last we ever saw of the Kipp which was reduced to smithereens - illustrating once more one of the problems we chemists face: invariably being associated with bangs, stinks and poisoning. I was immediately hooked.

A strong driver for the development of chemistry in the 19th century was the need for quality control and ever more sophisticated methods of analysis to detect fraud, food adulteration and crime. In inorganic analysis, the identification of cations involved the methodical separation of the metals into groups according to their reactions with a set of standard reagents. Central to all this was hydrogen sulfide, that most quintessentially ’chemical’ of gases, which precipitated the softer metals like arsenic under either acidic or alkaline conditions. In the days before gas cylinders the problem was getting a reliable supply of H2S which you could turn on and off. Analysts across Europe wrestled with the problem and provided elaborate designs for apparatus in the textbooks they wrote. The great German chemist Carl Fresenius (1818-1897), for example, invented a device so complicated it took two pages to describe and which only a madman would use nowadays.

In 1844, a Dutch instrument maker working in Delft, Petrus Jacobus Kipp (1808-1864) came up with two designs for simplified apparatus to generate H2S and got the German glassblower Heinrich Geissler (of glowing gas tube fame) to build them. The second of the designs proved successful and he started selling it through his pharmacy business Kipp & Zonen. The rest, as they say, is history.

The self-regulating Kipp’s gas generator was and is childishly simple to use. A solid reagent is placed in the middle bulb [C] (iron pyrites, if you want to make H2S, or marble chips if you want CO2). The top bulb [A] is actually a funnel with a long neck that extends down to the bottom of the assembly. Dilute acid is poured in through the top and builds up to react with the solid in the middle bulb, liberating the gas. As gas is produced and the pressure in the lower bulbs increases, the acid is pushed back up the funnel preventing further reaction. Thus the acid only runs down when gas is drawn off from the valve [D] in the middle bulb. So successful was the device that they are still sold in their hundreds all over the world, a gas generator far cheaper and often easier than small lecture bottles. Just remember not to put a lit taper to the outlet when generating a flammable gas.

Andrea Sella is an inorganic chemist at University College London