The vacuum distillation apparatus invented by Leonard Temple Thorne, but with Perkin's name on it 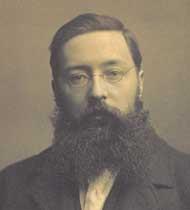 English organic chemist, 1860-1929. Synthesised a number of natural products, and commemorated in the Perkin triangle for vacuum distillation

Travel, it is often said, broadens the mind. The great traveller writers like Herodotus, Hakluyt and Ibn Battuta brought back tales of mysterious lands far beyond the reach of ordinary mortals. By the 18th century, well-heeled young gentlemen would travel on a Grand Tour, accompanied by a tutor, to complete their education, visiting the classical marvels of Rome, gasping at the sublime sight of an erupting volcano, and, if they could give their chaperone the slip, sowing their wild oats in the flesh-pots of the Med. By the 19th century, travel was more democratised and, for chemists at least, completing your education meant studying in Germany, where the most famous chemical pioneers were based.

One such aspiring chemist in 1880 was William Henry Perkin - son of the more famous William Henry Perkin (1838-1907) who at the age of 18 had accidentally synthesised the stunning purple dye he called ’mauve’, and had set up a business in the UK to exploit his discovery (Chemistry World, June 2006, p36). 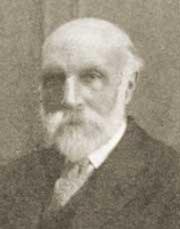 William Henry Jr. (was he named through vanity, or lack of imagination?), was the eldest of three Perkin sons, all of whom became chemists. Having studied with Edward Frankland, he came to Germany to work with one of the Big Names of the day, Johannes Wislicenus, an early adopter of the structural theory of chemistry which held that connectivity was the key to chemical understanding.

Arriving in W?rzburg, Perkin would have met a bookish Londoner a little older than himself, Leonard Temple Thorne, who had also been through Frankland’s lab. Thorne was working on condensation reactions, chemistry that often led to fragile products not easily purified by distillation. Thorne had therefore turned to a new method - vacuum distillation, a revolutionary idea at the time. By lowering the boiling point, it greatly extended the variety of the molecules that could be purified. Collecting different distillation fractions, however, presented a problem, as changing the receiving flask meant breaking the vacuum, and stopping the distillation. A favoured method of the day was to use a revolving stand of test tubes, enclosed in a modified vacuum dessicator, that could be spun to collect each fraction. It worked, but only allowed small fractions to be collected.

Thorne’s approach was quite different. Fractions were collected in a pressure-equalising addition funnel, the side tubes arranged in a triangle and equipped with stop-cocks, so that the receiving flask, attached at the bottom, could be isolated from the distillation without interruption. The beauty of Thorne’s triangle was that it could be applied to reactions on even the largest of scales. And, as he noted in his paper of 1883, it could also be used to isolate air-sensitive products - the main reasons it is still used today, in modified form.

After getting his doctorate in 1882, Perkin went to Adolf Baeyer’s group in Munich, which attracted the best young minds in Germany. His initial task involved a lot of distillations, and it is likely that he used Thorne’s device in his work. He was soon supervising students, and followed up his hunch that it was possible to make 3 and 4-membered rings, in spite of colleagues warning him that he would make a fool of himself. Perkin was triumphantly right, and after short stints in Manchester and Heriot-Watt College in Edinburgh, became Professor of Chemistry in Manchester, where he soon built up a formidable natural products synthesis school. This was followed by his appointment as Waynflete Professor of Chemistry at Oxford. In spite of heavy administrative responsibilities, that he hated, he still worked at the bench in the afternoons, with Thorne’s triangle- by now Perkin’s trademark - at the ready for distillations. 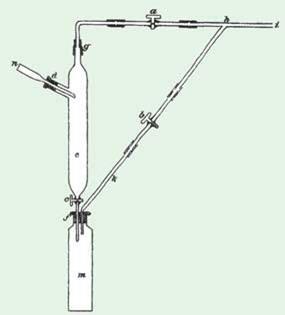 And what of Thorne? He moved back to the UK in 1881 where he became Perkin Sr.’s assistant in his Surrey laboratory. In 1886, Thorne joined Brin’s Oxygen Company, supplier of liquid air to William Ramsay in his quest for the heavier noble gases. He later worked for Garton Hill, a supplier of brewing ingredients.

Thorne remained fond of his time in Germany and was an active member of the British Goethe Society, devoting much time to promoting Anglo-German relations through the 20’s and early 30’s. One can imagine his sadness that the academic and cultural exchanges he and his contemporaries had been involved in had done so little to stem the tides of history. Meanwhile his invention would be forever associated, in England at least, with the Perkin family. In Germany, meanwhile, the device became known as the Ansch?tz-Thiele adapter. Is it too late to rename it?

Andrea Sella is a lecturer in inorganic chemistry at University College London. He thanks Bill Brock and Jack Morrell for their assistance with this article