Derek Lowe takes a tour of the 'instrument graveyard'

Derek Lowe takes a tour of the ’instrument graveyard’

I love instrumentation. I have no problem admitting this; watching a piece of equipment doing work for me is always enjoyable. It’s just a bonus that many of these machines are doing work that I, as a human, am completely incapable of. Now, this is not the place to go into what I am and am not capable of doing - perhaps we’ll save that until next month - but I think that all chemists can agree that our work would swiftly come to a squealing halt without modern instruments.

As an industrial chemist, I’ve come to expect that there will always be a walk-up LC-MS (liquid chromatography-mass spectrometry) machine to tell me what’s in my samples. It’s come to the point that I hardly bother running old-fashioned TLC (thin layer chromatography) plates any more, since the machine can (usually) tell me so much more. In fact, the TLC chamber gets the most use only when the LC-MS is either hopelessly backed up with samples or down for repairs. 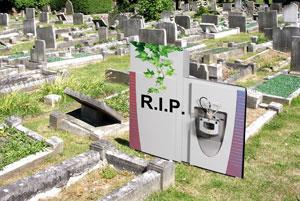 Ah, ’down for repairs’. There’s a phrase that had to come up eventually. The robustness of an instrument is a hard thing to evaluate before purchase. Sometimes the thing is so hard to install that a real world test isn’t feasible, and sometimes the manufacturer is unwilling to have their demonstration unit put through every random chemist’s idea of a good solid shakedown. But a piece of equipment is only of use to anyone while it’s running, of course, and one that keeps breaking down is actually much worse than no instrument at all. There’s another thing that’s worse than no instrument, though, and that’s one that isn’t used. It’s taken a piece of the budget, it takes up space, it’s taken up someone’s time, and it does no one any good. And there are far more of these things out there than chemists (or instrument companies) like to admit. Add in the ones that have migrated to the storage rooms (the final, painful admission of a mistake), and you are looking at a substantial pile of equipment, and a substantial dead loss for its purchasers.

How do these things get bought in the first place? A tall glass of hope and salesmanship generally get poured, sometimes with a dash of inexperience for flavour. Someone who hasn’t seen expensive machinery abandoned before might find this hard to believe, but spending large amounts of money does not guarantee that users of the new technology will actually show up. It’s easy to blame timid scientists who won’t learn the new ways, but more often, the problem is that the new equipment is solving a problem that no one wanted solved, or doing it in a way that’s more trouble than it’s worth.

Instrument companies may realise this problem, but their sales literature doesn’t always keep up. I’ve evaluated a number of flow reactors, for example, and if one more brochure tells me how I can use the wonderful new machine to (brace yourselves) actually form or hydrolyse an ester, I may do something reckless. This is just not going to happen; it’s like trying to sell a machine that will peel a banana for you. No matter how impressively the Peelatron 500 may perform, it’s not going to sell. You have to show the customer how the new machine will either take on a substantial burden of work, or do something that previously wouldn’t be done. Esterification fails both those criteria.

If I had to pick the type of machine that has won the ’most likely to gather dust’ prize, it would probably be the parallel synthesis/combinatorial chemistry devices. Readers who worked through the 1990s are probably all smiling and nodding their heads at the thought, remembering those impressive splitter and mixers, the bead-sifters and resin washers. Where are they now? Cluttering sub-basements, for the most part, if not landfills and recycling centres. And it’s not as if they were shipped out with a lot of wear and tear on them. After a few hopeful runs at the beginning, too many of these instruments were used only fitfully, and then not at all. I remember a large apparatus down the hall from me that looked like something from a movie set when it was running. But I only saw the spectacle once, when a group of visitors came through. Cleaning it off for the occasion must have brought back painful memories.

Unfortunately, I don’t see any easy way to avoid such situations. New inventions are always going to be coming down the chute, and not all of them are going to be dazzling ornaments of achievement, even if they may appear to be for a while. The price of progress is sitting there, in an unvisited storeroom, on a high shelf. And there’s still room next to it.