Science lives through trust. None of us can do our work without depending on that of others, and if we can’t trust their reports, where are we? Every time you read a new paper, the unspoken thought is: ’these people may be mistaken, but they are not lying to me.’ Still, everyone knows that a certain portion of the papers in the chemical literature (or any literature) cannot be believed. But here’s what we don’t know: how large that fraction is, whether it’s growing or shrinking, and how best to avoid it. 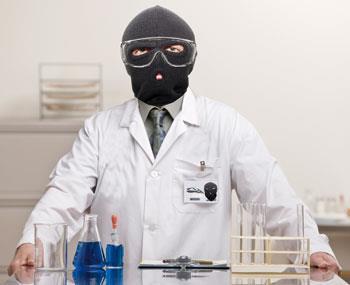 A key feature that probably keeps the whole scientific enterprise running is that the most interesting and useful work will be the most likely to be repeated by someone else. This is one of the reasons that high-profile frauds are so baffling from the outside. How can you fake an exciting, headline-grabbing discovery and not expect to get caught? No, it’s the obscure stuff that surely has the largest dose of unreality in it. No one’s ever bothered to follow up on it, because no one cares, and the people who faked it into being in the first place probably counted on just that to protect themselves. Of course, one of the other interesting things about science is the way that seemingly useless data can come back to life for reasons no one can anticipate. So while honest scientists dream of such things, dishonest ones must live in fear.

But I’ve been talking about journal articles so far, a perspective that ignores the huge amounts of data in the patent files. It’s been remarked many times that this part of the chemical literature doesn’t get its due, in citations or even in general respect. Chemical patents have (especially among academic researchers) a reputation for unreliability and deliberate obscurity. Actually, they have that reputation (at times) among industrial chemists as well. A colleague of mine used to leaf through some hefty patent application, looking for a compound preparation, while muttering ’lies, all lies’ the whole time.

Was he right? Is it that bad? Speaking as someone who’s had to reproduce many patent procedures over the years, my feeling is that the patent literature in chemistry is no worse than the journal literature. (Whether that’s a compliment to it or not will be left up to the reader). But it is important to distinguish the claims in a patent from its procedures. The claims, naturally, push out as far as the patent office will let them expand. Whether or not they stand up, well, that forms the playing field for the lawyers. But the chemical procedures, the ones that show data to characterise the compounds, those are supposed to be real and they are expected to work.

In fact, the validity of the whole patent can depend on them working, which makes the procedures the most reliable part of the whole document. There is money riding on the question of validity. And while the prospect of gain can motivate people to cheat, it can also motivate them to act forthrightly if the system makes that the most profitable choice. And that’s what a patent regime is supposed to do - it trades a period of exclusivity for disclosure, and that disclosure is supposed to be detailed enough for anyone ’skilled in the art’ to reproduce it.

The other feature that the patent system has going for it is that it’s not as fragmented as the open literature. There is no patent equivalent for those obscure journals of chemistry that no one ever reads or cites. For a chemical patent to be worth anything, it has to be filed in the major venues (the US, European and Japanese patent offices as well as the World Intellectual Property Organization). And since most of those turn out to be variations on the same document, it’s as if everything were being published in one big journal.

Admittedly, it’s also one big non-peer-reviewed journal, but peer review is not magic. It seems to be more effective at keeping poorly argued papers out of the literature than fraudulent ones. Dull fakery looks very much like dull reality, and that trust I spoke of earlier allows such things to pass through the editorial process. Never once have I heard of a reviewer turning down a paper because they thought it was faked - only because it was poorly written, trivial, repeated too much published work, etc. And few would deny that enough of those papers still manage to get through!