Drug discovery is an inherently risky business. Derek Lowe tries to balance some of the risk equations

Drug discovery is an inherently risky business. Derek Lowe tries to balance some of the risk equations 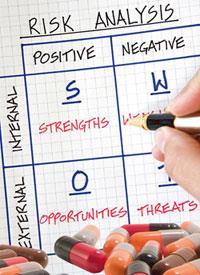 It’s about more than just probability of success

Drug failure rates in clinical trials can be easily described by one word: ’high’. Well, maybe two words: ’(vulgar adjective) high’. But there are gradations, and on such differences does the whole industry turn. For example, the failure rates for two of the roughest therapeutic areas, cancer and drugs for the central nervous system (CNS), may approach 95 per cent. Meanwhile, at the other end of the spectrum, cardiovascular drugs seem to have a failure rate somewhere in the mid-80s. (That’s worth taking a few minutes to contemplate on its own: the safest drug category of all, if things keep on improving, might actually get to the point where only eight out of ten new compounds fail in human trials).

Looking at those figures, you might imagine that drug companies are working the cardiovascular area more than the others. After all, we get criticised in this industry for playing things too safe (as if any business with that sort of attrition could be described as safe!). But that neglects the other side of the equation - if the risks are clear, what about the corresponding rewards? Working that out is when everyone’s face assumes a thoughtful sort of expression.

The thing to realise is that cardiovascular disease, in addition to being the best bet clinically, is also probably the best-served therapeutic market out there. (These two situations are absolutely, completely related). So you have to not only assess the chances of your new drug working, you have to ask if anyone is going to want it. Lowering high blood pressure, for example, is something that can be done effectively most of the time with the various existing classes of drugs. Many of these are generic, and the ones that aren’t (including some big-selling angiotensin antagonists) are heading that way. If you discover a wonderful drug for hypertension tomorrow, well, it had better be wonderful enough to make it worth paying for in a market full of cheap, familiar, effective drugs that physicians have had years of experience prescribing. Sound appealing?

Not very, which is why not many companies are working in this space anymore. There are unsolved problems in cardiovascular disease, of course, but solving them will surely bring that failure rate up a bit. And when you come to an area like CNS, the risk-to-reward ratio is at its most extreme. The first company to come up with an effective therapy for Alzheimer’s disease, to name just one of many outstanding examples, will provide an enormous boon to mankind, and coin enormous amounts of money at the same time. But the amount of time and money that’s been spent trying to realise that goal is hard to even imagine. Alzheimer’s disease, as a drug discovery area, is a blasted wasteland littered with rusted hypotheses and smoldering craters where clinical candidates have blown up.

The prizes that lie just past the land mines and razor wire keep companies coming back. But there’s a third variable in all these calculations: how much it will cost to make it through the clinic at all. Cardiovascular trials, since they have to be run against a very robust standard of care, tend to be very large and expensive. CNS trials, since they’re often against slow-developing diseases without good endpoints, can also be nightmarish. There’s a case to be made for companies abandoning such death-or-glory clinical research areas until the failure rate can honestly be said to have improved. But on the other hand, without those failures to show what doesn’t work, the rates might not come down much at all. You’d hope that there would be a better way to find the land mines than by throwing entire drug projects on top of them, but so far that’s been almost the only solution.

That, then, is the state of the art: using imperfect means to distinguish between the merely risky and the insanely risky, and trying to make sure that your development portfolio has a chance of delivering something in the face of such odds. Easy money it is, and it’s waiting for you to come on down and claim it!