Who's that asleep at the back? Don't be too quick to blame yourself when tedious talks and soporific seminars fail to inspire, says Derek Lowe

Who’s that asleep at the back? Don’t be too quick to blame yourself when tedious talks and soporific seminars fail to inspire, says Derek Lowe

It’s confession time. And I’m not just owning up to a past sin, but one that I continue to commit. I am interested in chemistry (a good thing too), and, with occasional gaps as the waves of new papers break over my head, I keep up with the literature. But here it is: I cannot stand to listen to most of the talks and seminars I hear on the subject.

This problem has always been with me. I have to admit that I’ve never been the most patient listener in the world to any sort of long presentation. But it has grown steadily worse, which suggests at least one cause for my syndrome. The best way to keep my attention is to keep on telling me things that I didn’t know before. Naturally, that’s not as easy to do as it used to be for seminars in my own field (I do much better when I’m listening to someone speak on a subject outside it). A certain level of boredom therefore is probably unavoidable.

But I can’t help thinking that many speakers are going well past that and undertaking an extensive survey of the territory of Completely Avoidable Boredom. Now, some of the reasons for this are well known. It’s a truism that many scientists are poor public speakers (a truism because it’s true). I’ve lost count of the number of how-not-to-give-a-presentation articles I’ve seen over the years. They’ve all been full of sound advice. But how many people take any of it? Perhaps the real question is even more pointed: how many people are capable of taking any of it? It’s tempting to imagine that a world in which everyone gave more competent talks is not beyond our reach. Unfortunately however, we might be living in the ’as good as it gets’ world, where most of what can be done in this regard has already been done. 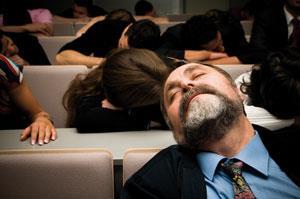 A common response to the presentation of a ’slightly better’ method in organic synthesis?

On the other hand, maybe the reason that too many presentations are tedious is not just that they’re tediously presented, but that they’re presentations of tedious work. In that case, there’s only so much that a good speaker can do. And is it worth doing? Watching someone give a well-honed presentation on an uninteresting subject is like watching a painter produce the best velvet Elvis wall hanging ever.

My worry is that chemistry - especially organic synthesis - has been producing too much of this sort of thing: incremental work. To some extent, it always has to be done, but I mean incremental in the worst ways. These are the reports of slightly better methods (or, too often, methods that aren’t really better at all, but just slightly different). They’re the syntheses of natural products that demonstrate nothing more than that the product - which no one wants - can be made by means that no one cares about. And they’re the papers on trendy subjects that seem to exist because (a) that’s what the authors could get funding for and (b) that’s what the journal editors like to see.

It’s not like all these categories can’t produce worthwhile science. New synthetic methods, if they’re really new, can change the whole landscape of chemistry. Hot subjects can be hot for good reason, but ’everyone else is publishing on this’ is not a good enough reason by itself. Even natural product synthesis, about which I’ve said unkind things, can drive the discovery of new chemistry - it is, in fact, supposed to be doing just that, but too often it doesn’t.