Could red light and green tea really give 'facial rejuvenation'? Philip Ball looks at the intriguing science behind this new claim

Could red light and green tea really give ’facial rejuvenation’? Philip Ball looks at the intriguing science behind this new claim

There are few more treacherous collisions of science with commerce than in the cosmetics industry. One isinstinctively wary of ’scientifically proven’ claims of treatments that will make you look better and live longer: the basic science often does not meet up with anything resembling a clinical trial. One moment antioxidants are going to add years to your life, the next they are liable to knock them off.1

At face value, a new claim for a ’facial rejuvenation programme’ by Andrei Sommer and Dan Zhu at the University of Ulm in Germany appears to have all the hallmarks of pharmaceutical snake-oil: light irradiation, links to reactive oxygen species and even to green tea.2 But don’t judge this research too hastily - not least because it comes packed with intriguing science. 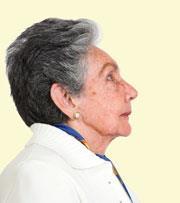 Sommer never set out to develop anything remotely like an anti-wrinkle treatment. He was interested in the character of diamond surfaces, and in particular why they are electrically conducting when covered with hydrogen to cap dangling bonds. His experiments with Zhu and Kai Br?hne suggested that this was due to the presence of nanoscopically thin surface films of water, through which protons can hop and carry a current.3 The films form even though the hydrogenated diamond surface is rather hydrophobic, and Sommer and colleagues believe that the water molecules are, crucially, arranged with crystalline regularity. With Arnaud Caron and Hans-J?rg Fecht, Sommer found that red light seems to remove the water layer on a hydrophobic surface while making it more fluid on a hydrophilic one.4

Sommer, Zhu and Fecht suggested that such ordered water films might have templated monolayers of organic molecules on the surfaces of ancient or extraterrestrial diamonds on the early Earth, thus seeding an origin of life.5 A prebiotic role of interfacial water layers on minerals was proposed in the 1970s by biologist Albert Szent-Gy?rgyi.6

So far, so speculative. But the water layers may also explain why hydrogenated diamond has a very low coefficient of friction: the highly stable, ordered and polarised water layers provide a kind of solid-state lubricant when two such surfaces are brought together.7 And if that’s true here, then why not also on the hydrophobic regions of proteins that make up fibrous tissue, such as elastin, the elastic component of skin? Indeed, Szent-Gy?rgyi also raised the possibility that biological structures might be lubricated this way.6

Sommer and Zhu began examining this possibility last year, when they found that regular pulses of red light (with a wavelength of 670nm) from an LED could reduce Sommer’s own crows’-feet facial wrinkles.8  The ageing of skin seems linked to a loss of elasticity in elastin. This largely hydrophobic fibrous protein becomes increasingly hydrophilic with age as it gets coated with a film of fatty acids, amino acids and calcium salts - and that might make the water films more viscous and ’glue-like’ (large increases in viscosity for interfacial water are well documented). Given their earlier studies, Sommer and Zhu figured that the water layers on aged elastin might be made more fluid - and the fibre itself thus more elastic - with red light.

Yet there’s another factor at play here: reactive oxygen species (ROS). Produced by air pollution and ultraviolet light, these are widely recognised to cause oxidative cell damage and thus play a role in ageing. Indeed, the beneficial effects of 10 months of red-light treatment on Sommer’s skin were negated by two months of exposure to harsh sunlight and polluted air in urban China and Cairo. And in fact the red-light treatment might itself partially cancel its own benefits by generating ROS photochemically. To counteract such influences, Sommer and Zhu combined the red-light irradiation with the application of a ROS scavenger directly onto the skin, namely epigallocatechin gallate extracted from green tea. This quickly restored the smoother skin appearance within one month.

The story is still more complex, because ROS, which are predominantly negatively charged, may accumulate transiently at the elastin-water interface and affect the water layers there by making the surface more hydrophilic. What’s more, Sommer and Zhu think that these effects may influence cell ageing by altering the rate at which telomeres - the sacrificial ’caps’ of chromosomes, which protect against DNA damage - get eroded (an issue that scooped this year’s Nobel prize for physiology or medicine). Certainly, it seems that green tea (which can scavenge ROS) plays some role in telomere shortening and longevity.9 But unravelling that story is going to take some work.